For most Americans, the prospect of living in states with no income tax is an attractive one. On top of growing federal tax bills, paying thousands more in state income tax is a significant drain on taxpayers' finances.

Residents of seven U.S. states are fortunate enough not to have to pay state income tax. But the obvious question is whether those residents must make up the difference through other types of taxes. Let's look at these seven states and where they get the revenue needed to provide the services their residents demand, according to the latest figures from the Census Bureau. 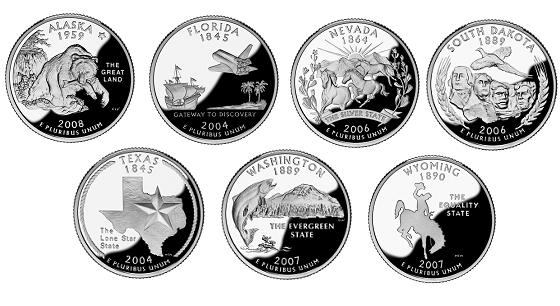 Alaska is the only state on the list that imposes neither a state income tax nor a state-level sales tax. What Alaska does have, though, is a wealth of natural resources. Oil-related taxes bring in nearly all of the state's revenue. These resources are also sufficient to provide residents with regular payments from the Alaska Permanent Fund, which is funded from mineral royalty payments to the state. The 2013 payment will give more than 600,000 eligible residents of the state $900 each.

Florida doesn't have the mineral wealth that Alaska and several other states on this list possess, but the Sunshine State does have a huge population with disposable income. As a result, Florida gets the majority of its revenue from sales and gross-receipts taxes, with a state sales tax rate of 6% and local add-ons that bring the rate higher in most areas. Although Florida has a sizable amount of valuable real estate, its property tax rates are relatively low, which combines with what many see as favorable weather to make the state a popular retirement destination.

Like Florida, Nevada also relies on sales and gross receipts taxes for much of its revenue, with the state's sales tax rate weighing in at 6.85%. The state's famous casino industry is also a source of taxes for Nevada, but to help support that industry, Nevada's tax rates on gross gaming profits are the lowest in the country. When you consider the degree to which casinos are responsible for drawing in visitors who pay sales taxes, hotel taxes, and other revenue generators, Nevada taxpayers are highly dependent on gaming's success in order to keep their own tax rates low.

South Dakota gets most of its tax revenue from sales and gross receipts taxes, with a 4% state sales tax applied to purchases. A 3% excise tax on motor vehicles also bring in a sizable amount of the state's taxes. South Dakota has also made efforts to use its favorable laws to entice businesses into the state; most notably, laws that lifted caps on interest rates led to an influx of credit card business into South Dakota in the past.

With the nation's second-largest population, Texas uses a combination of revenue from its oil and gas resources and sales taxes to bring in ample revenue for the state's budget. Texas charges a 6.25% sales tax, on top of which localities can add as much as 2 percentage points. At the same time, though, Texas has been reluctant to impose too many taxes on the energy industry, with many lawmakers arguing that tax cuts are better to help encourage drilling and keep high-paying energy jobs coming into the state.

Washington doesn't have energy resources, but it does have a substantial population, and its 6.5% state tax rate can climb more than 3 additional percentage points in some areas. Sales and gross receipts taxes make up the bulk of Washington's budget revenue, with the state's business and occupation tax bringing in money from the corporate side of the taxpayer rolls.

Wyoming has the smallest population in the nation, but it has a combination of mineral resources and tourism, including Yellowstone National Park and the Jackson Hole resort area in the Tetons. The sales tax is modest at 4%, and the state won top billing in the Tax Foundation's 2013 list of friendliest states overall for taxation. Severance taxes for coal, oil, and gas production bring in more revenue than any other source.

What you should know

Most states with no income tax score well in terms of overall tax burdens, with their lack of an income tax reflecting in part their philosophy on how much to spend on government services. Nevertheless, before you decide to move to one of these states based solely on their income tax, make sure you know in detail what other taxes you might end up paying.