Sales tax in Texas is a key revenue generator for the state government, largely because the Lone Star state is one of just a handful of states across the U.S. that doesn't have a state income tax. As a result, you'll find sales tax rates of anywhere from 6.25% to 8.25% in Texas, with the exact amount depending on the local add-ons that are present in a particular area. Between state, county, city, and special purpose taxes for transit and other items, Texas sales tax is important for a wide variety of reasons.

How much sales tax Texans pay

Everyone within the state of Texas pays at least 6.25% in sales tax, as that is the baseline amount that the state government itself charges. The state collects sales tax on all retail sales, as well as on leases and rentals of most goods. Unlike many states, Texas also collects sales tax on certain types of services. A large number of taxable services (opens PDF) apply in Texas, with examples including amusement parks, cable television, and lawn care and landscaping services.

Texas does have some exemptions from the sales tax. The most notable is for grocery items, but the exemption isn't universal. Prepared foods aren't eligible for the exemption, and certain items like beverages and candy still require paying sales tax even if you buy them at grocery stores or other locations where exempt items are typically sold.

In addition to the statewide tax, Texas allows certain local governments to charge sales taxes of their own. All told, the extra amount of tax is limited to 2%, which means that the most you'll pay in sales tax in Texas is 8.25%. Among the governments that can charge these taxes are counties, cities and towns, transit districts, and other special purpose districts. Most of the largest cities in the state, including Houston, Dallas, San Antonio, Austin, and El Paso, all impose the maximum 8.25% amount. 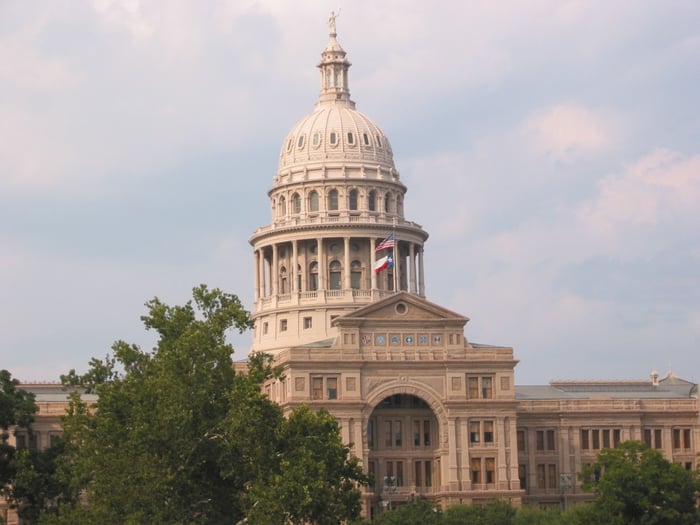 How sales tax gets paid in Texas

There are two ways that sales tax gets paid in Texas. First, businesses are responsible for collecting tax on actual sales. The state government collects reports and tax revenue, imposing deadlines on submission and offering modest rewards for timely payment.

Also, even if Texans buy things from outside the state, they're still liable for use tax in the same amount. This applies not only to goods purchased while traveling outside Texas but also to internet and mail order goods that are delivered to residences within the state. The state government has a special tax form on which you can report and pay use taxes.

Because Texas doesn't have a state income tax, sales tax is important for federal income tax purposes. Texas residents who itemize their deductions are entitled to claim the amount of sales tax they pay. Alternatively, the IRS provides a summary table with a safe-harbor number you can take as a deduction. Therefore, even if you don't keep detailed records of all of your purchases during a given year, you can still take a deduction based on the amount of sales tax that those in similar income groups and family sizes take.

The sales tax in Texas is extremely important as a vehicle for collecting much-needed revenue. By understanding the local variations in the way that Texas communities charge sales tax, you'll be in a better position to avoid surprises and find ways to pay as little in tax as you can.