Please ensure Javascript is enabled for purposes of website accessibility
Log In Help Join The Motley Fool
Free Article Join Over 1 Million Premium Members And Get More In-Depth Stock Guidance and Research
By Wendy Connick - Updated Nov 13, 2017 at 9:32AM

If you own or have sold bitcoins, you may owe one or more different taxes to the IRS.

As bitcoin adoption climbs, the IRS has gotten more and more serious about tracking down bitcoin tax evaders. The agency even filed a lawsuit earlier this year against Coinbase, demanding that the company turn over customer account information and transaction data. If you fail to correctly report your bitcoin gains on your tax return -- whether or not it was an accident -- you might be targeted by the IRS.

For federal tax purposes, virtual currency is considered property, not money. That means your bitcoin holdings are subject to capital gains taxes if you sell them, and you're required to report such a sale on your federal income tax return (whether or not you actually made a profit).

In addition, ordinary rules governing work income apply even if you receive bitcoins rather than cash for your work. For instance, if someone pays you in bitcoins for work you've done, be it making a physical product or providing a service, you'll need to report the bitcoins as income at their fair market value. You can use the price listed on an established bitcoin exchange like Coinbase at the time you received them as their fair market value. And bitcoin miners are considered to be in business for themselves, so they're required to pay self-employment tax on their earnings. 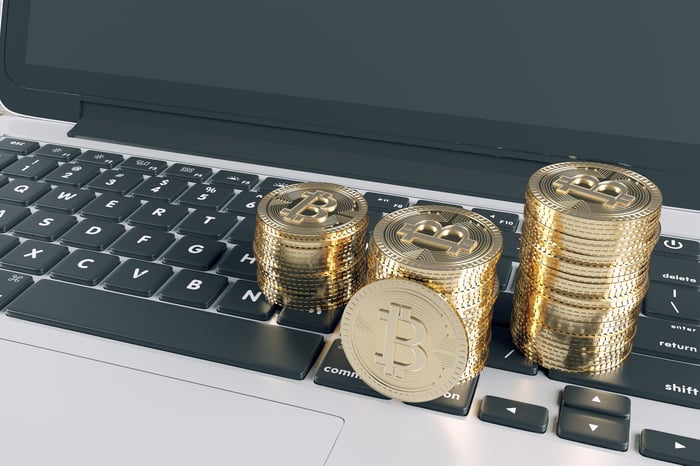 Once you own bitcoins, if they're just sitting there in your account, you don't need to worry about capital gains taxes. Like stocks and other such assets, capital gains taxes on bitcoins are only triggered when you "realize" the gains -- in other words, when you sell the bitcoins.

You can report bitcoin transactions by filling out Form 8949. Be aware that you'll need to fill out this form every year you sell any bitcoins, even if you didn't make a profit on the sale. If you held the bitcoins in question for more than one year, then you qualify for the long-term capital gains tax; if not, you'll have to pay the short-term capital gains rate.

Short-term bitcoin transactions should go on the first page of Form 8949; check Box C at the top of the section to indicate that you didn't receive a 1099-B form for the transaction. Long-term transactions go on the second page of the form and you should check Box F for these transactions. Column e, "cost or other basis," would be the amount you originally paid for the bitcoins you sold. Once you've filled out Form 8949, transfer the information over to Schedule D as instructed on the form and complete this schedule to determine your total capital gains or losses for the year.

If you received bitcoins as payment from an employer or in exchange for something you sold, you've got to report that payment as income on your tax return. Bitcoin from an employer should be included in your W-2 for the year; if it doesn't show up there, contact your HR department immediately and ask them for a corrected W-2.

Bitcoins received as self-employment income, whether as a payment or thanks to your mining efforts, go on your Schedule C for the year. Be sure to keep accurate records of when you received each payment and the fair market value of the bitcoins you received on that day; you won't have to turn all this information in with your tax return, but you'll definitely need it if the IRS chooses to audit you later. Hang onto this information for at least five years before disposing of it.

What happens if you don't pay your bitcoin taxes?

Failing to report your bitcoin activity to the IRS could cost you a great deal down the line. The IRS has gotten very serious about tracking down bitcoin tax evaders, and the pressure will only increase as bitcoin adoption – and value – continues to climb. If you don't report bitcoin activity on your tax return and the IRS catches you, at the very least you'll be slapped with a negligence penalty and interest on the taxes you didn't pay. And if the agency decides that you willfully evaded your bitcoin taxes, the potential penalties increase radically – up to and including jail time in extreme circumstances. You're much better off spending the time and money to pay your taxes now, instead of having to face the music a few years hence.