Learn the basics of this valuable benefit.

The idea of the government paying its residents to live in a particular state sounds like a crazy dream to most Americans who pay extensive state taxes. Yet in Alaska, it's a reality, thanks to the Alaska Permanent Fund and its payment of annual dividends to those residents who qualify. Here's how you can claim your piece of Alaska's Permanent Fund Dividend pie.

The state of Alaska established the Alaska Permanent Fund in 1976 in response to an amendment to the state's constitution. The general idea was to create a financial investment fund that would compensate Alaska for the drilling and removal of oil and other natural resources for its borders, ensuring that the state wouldn't be under financial stress once its resources were depleted. Under the constitutional provision, at least 25% of mineral lease rentals, royalties, and associated payments are to be put in a permanent fund, with the principal invested in income-producing assets.

The Alaska Permanent Fund operates in a manner similar to that of an endowment fund in that spending is restricted to the income that the fund's assets generate, leaving the principal untouched for permanent investment. Most of the spending from the fund has gone to pay Permanent Fund dividends, which began in 1980. 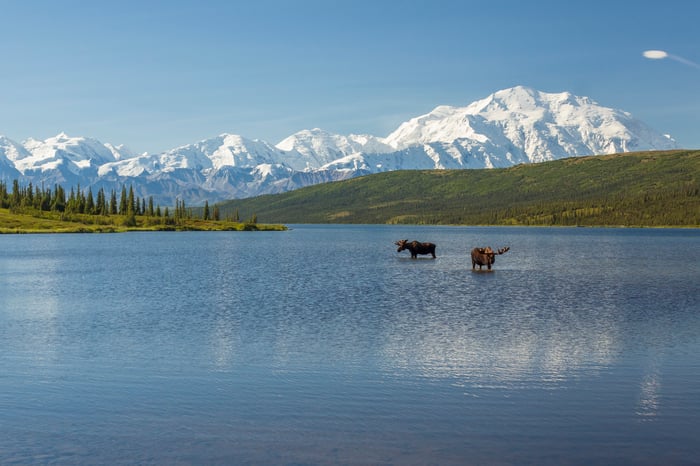 How do Permanent Fund dividends work?

Each year, the Permanent Fund Dividend division of the state government uses a calculation method defined by statute in order to determine the amount of the dividend. The formula takes into consideration the investment performance of the fund over the preceding five years. Over the history of the fund, dividends have ranged from as little as $331 in 1984 to $2,072 in 2015.

To get a dividend, qualified residents have to file an application between Jan. 1 and March 31. Paper applications are available, or one can apply online at the Permanent Fund Division website. First-time filers have some additional administrative hurdles to establish identity, but every eligible resident must file a new application each year to receive their dividend. The payment of the dividend usually happens in October.

What are the requirements to qualify to receive a dividend?

Once you've established yourself as a resident, you don't have to stay in Alaska without ever leaving. However, the terms under which you leave temporarily must be consistent the overall intent to return and remain a resident. Statutory exceptions governing situations like medical conditions requiring treatment outside the state can apply to provide dividends to those who spend more than 180 days away from Alaska. At the very least, however, one must spend 72 consecutive hours in Alaska every two years and 30 total days in every five-year period.

However, under some situations, you can forfeit your dividend rights. If you're sentenced or incarcerated during the year after committing a felony crime, then you can't claim a dividend for that year. Those who were convicted of a prior felony or multiple misdemeanors in 1997 or later also forfeit their annual dividend if they are incarcerated to due a misdemeanor during the year in question.

Despite having no income or sales tax and the payment of a modest Permanent Fund dividend, Alaska can be a harsh environment, and costs of living are often higher due to its remote location and the difficulty of shipping goods to residents in the state. Few will move to Alaska simply to claim the dividend, but the payment can help offset some of the costs of choosing the nation's 49th state to call home.