Please ensure Javascript is enabled for purposes of website accessibility
Log In Help Join The Motley Fool
Free Article Join Over 1 Million Premium Members And Get More In-Depth Stock Guidance and Research
By Dan Caplinger - Updated Dec 4, 2017 at 6:51AM

Get the latest on how much the government will take away from you in the coming year.

Anyone who gets a paycheck knows how annoying it is to see taxes get withheld from your hard-earned money. One of the biggest recipients of tax withholding is often identified on your pay stub as FICA. FICA stands for the Federal Insurance Contributions Act, and it governs the amount of money that goes toward funding key programs like Social Security and Medicare. Below, you'll get a fresh look at where your FICA money goes and what you can expect to pay in 2018.

You won't necessarily see any reference to FICA when you get paid. Some companies break out the amount that gets withheld for Social Security separately from Medicare withholding, making the breakdown between the two programs much clearer. But many companies combine the two into the single FICA category, reflecting their obligation under federal law to withhold wages to cover employees' share of those taxes and then send them on to the IRS.

The two parts of the FICA tax work slightly differently from each other. For the Social Security component of FICA, your employer will collect 6.2% of the first $128,400 of your work earnings as withholding. That works out to a maximum amount of $7,960.80 for the year. If you make more than $128,400, then you'll notice that after your employer has collected that maximum amount of tax, withholding for Social Security will stop, and your take-home pay will go up for the remainder of the year. 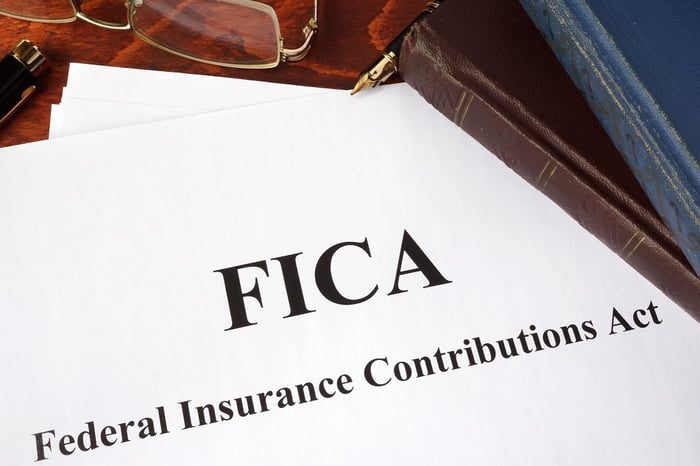 The Medicare component of FICA is smaller but doesn't have any limit on the amount of wages to which it applies. Therefore, your FICA withholding will include 1.45% of all of your wages -- no matter how high -- to go toward Medicare taxes.

There's a lot of uncertainty right now about the tax system, because Congress is considering reforms that could dramatically change key tax provisions. However, most of the focus among lawmakers right now is on the income tax system, and payroll tax provisions haven't really made it into discussions of immediate reform efforts.

That makes changes to FICA taxes in 2018 unlikely, but in the long run, modifications are more likely. Some people don't like the way that high-income taxpayers stop having to pay the Social Security part of FICA taxes after a certain point, calling it regressive. Medicare also used to have its own wage base above which no further taxes were imposed, but lawmakers eliminated that provision to make the tax apply to all income. Few lawmakers have gone so far as to advocate for an unlimited Social Security wage base. However, some have proposed a large one-time increase in the wage base, while others have suggested a surtax that would keep the existing wage base but then kick in with an additional tax for those making above certain larger amounts of income.

The vast majority of taxpayers will see no change to the FICA taxes they pay, with only high-income earners seeing a slight increase in the maximum amount of Social Security-related taxes taken out of their pay. With just about every tax provision on the table in Washington right now, you'll have to keep a close eye on Capitol Hill to see if the federal government makes any more drastic changes to the FICA tax scheme in the coming months.