Tax season is here, and most taxpayers start to think about the refund checks they'll get from the IRS after they file their annual returns. It's also the time of year when you'll see countless financial advice columns telling you that getting a big tax refund is actually a bad thing.

Yet even though the reasoning behind that advice is theoretically sound, the fact remains that for many Americans, an annual tax refund is the best way to make visible, meaningful change toward long-term financial goals that would otherwise go unfulfilled. In particular, there are three reasons why it's not dumb to want a bigger tax refund, even if the common wisdom is to take steps to avoid large refunds from the IRS. 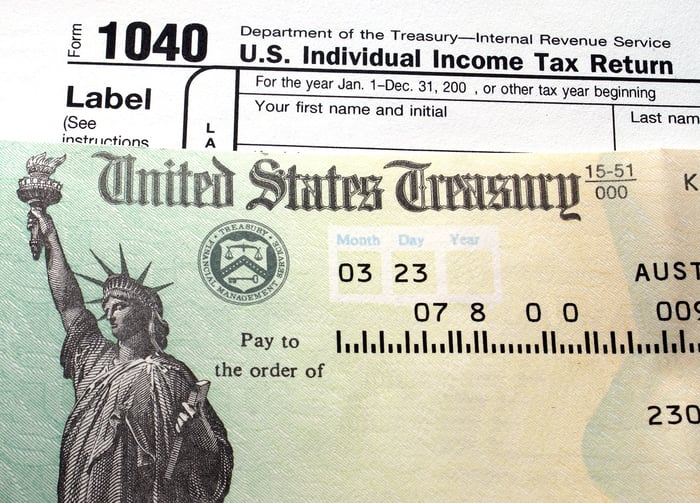 1. You wouldn't do the right thing with extra small amounts throughout the year.

The biggest argument against a big tax refund is that it's essentially the same thing as giving the IRS an interest-free loan of your own money. Your tax refund represents money that was withheld unnecessarily from your paycheck, money that could instead have boosted your take-home wages every pay period. If you get a $1,000 refund, the argument goes, you could instead have seen $20 per week more in your paychecks.

The problem with this argument is that it assumes that people are disciplined enough to take that $20 and put it to good use, such as paying down debt or investing for retirement or other long-term financial goals. In reality, many people wouldn't figure that an extra $20 per week would make that big a deal toward their savings, and some would be likely to spend the additional cash. Having too much money withheld for taxes might not be necessary, but it can turn into an automatic savings strategy that requires no additional effort and has a tangible payoff every year after you file your taxes.

2. You need a larger lump sum as part of your financial strategic plan.

Even if you do have the discipline to see the larger paychecks that you'd get from adjusting your tax withholding to eliminate your tax refund as a vehicle for savings, you can still end up in a position where those smaller, earlier payments don't do you much good. For example, if you're looking at an investment that has a $1,000 minimum balance to start, then getting $20 a week to put in a savings account earning less than 1% interest won't get you to $1,000 much faster than it would just to wait for a year-end tax refund.

Many investment companies acknowledge this difficulty by making it easier for those who can make regular periodic automatic deposits into brokerage accounts, mutual funds, or other investments with smaller initial and ongoing payments. Several financial institutions that ordinarily have investment minimums of $1,000 to $3,000 will open new accounts with as little as $50 to $100, as long as the customer also signs up for an automatic investment plan that makes additional $50 to $100 minimum deposits on a monthly or quarterly basis. Nevertheless, if the investment you want doesn't make such allowances, a big tax refund can be just as good in gaining entry to the investments you want.

3. You need the psychological boost from making a lot of progress in one fell swoop.

For many people, it's hard to feel like you're making much progress financially when you see only slow, small incremental gains in your investment accounts or reductions in how much debt you owe. That can make it hard to stay on track for the long run. It feels a lot better to get debts paid off all at once, or to make a big deposit to a savings account or an investment account.

It's true that with high-interest credit card debt, you're paying a sizable price for that psychological boost. But if it helps you stay the course with your long-term debt reduction plan, you can end up a lot better off in the long run -- even if it means hundreds in extra finance charges along the way.

Strictly speaking, in an ideal world, paying exactly the right amount of taxes through withholding would make things a lot less complicated for taxpayers overall. Yet if you like getting a tax refund at the end of the year, don't let the idea that you're giving up financial benefits unnecessarily stop you from following your own strategy. In many cases, the reward you'll feel from doing things your way will outweigh whatever minimal incremental savings you'd get from a small boost to your regular paycheck.