The regular deadline for your 2017 tax returns is next Tuesday, April 17, and if you're still working to get things finished up, you're not alone. Millions of taxpayers wait until the last minute to finalize their returns. But if you're not really sure that you have everything you need to get your returns prepared fully and accurately, then there's really only one thing you should do: Get a hold of an IRS Form 4868 and get some more time to do things right.

Some people mistakenly think there's a stigma involved in requesting a tax extension. Yet extensions are easy to get, and all it takes is filing the right form. The most important thing to remember is that you don't get any extension of time to file for an extension, so for most people, if you miss this year's April 17 deadline to file Form 4868, then you're out of luck. 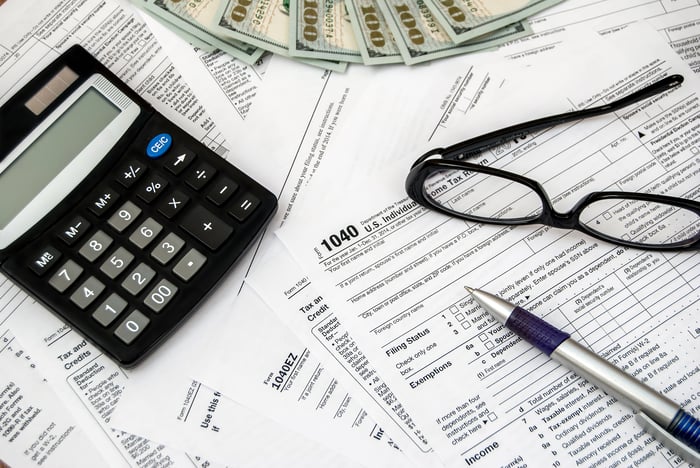 The IRS isn't exactly known for creating forms that are easy to understand. But as IRS forms go, Form 4868 is just about the simplest one you'll ever find. Its title tells you exactly what you need to know, as the IRS refers to the form as an "application for automatic extension of time to file U.S. individual income tax return."

Going through that title, there are a few key things to keep in mind:

How do I file for an extension?

To get your extension, there are several methods. You can obtain Form 4868 in paper form and send it to the IRS by mail, in which case the extension will be effective as long as you get the form in the mail by the original April 17 deadline. Alternatively, you can file Form 4868 electronically, which some last-minute filers will find to be the easiest way to get things done quickly and efficiently. Those who take advantage of electronic filing by using either the IRS Free File program or by using third-party tax preparation software will usually find that they'll have an option of requesting an extension electronically at little or no additional cost.

Finally, the IRS explains in the instructions on Form 4868 that if you pay your taxes electronically using the tax regulator's payment options, it will automatically process an extension of time to file. That's a backup method that can come in handy in a pinch. But there's still little reason not to take the additional step of filing Form 4868 and being absolutely sure that you're covered if you need extra time.

Some things to think about

Most people have to file Form 4868 by this year's April 17 deadline, but there's an exception for those who are out of the country. Those who qualify, such as military service personnel or those who work abroad, generally get two extra months to file without claiming an exemption. That gives you until mid-June to file. If you still need more time, you can file an extension through that mid-June deadline, and that will give you an extra four months through the last-chance mid-October filing deadline.

Lastly, keep in mind that just because you get an extension doesn't mean you have to wait until October to file. Using an extension to file late makes sense even if you end up sending in your return the day after the April deadline. It's all just a matter of how much extra time you truly need.

Be smart about extensions

With April 17 right around the corner, don't hesitate to file Form 4868 if you need the extra time before filing your tax returns. Taking the pressure off will let you be thorough and accurate in preparing your returns -- and avoid silly mistakes that can cause much larger problems down the road.