The latest numbers continue the upward trend for the U.S. government's red ink.

Across the nation, American families have to keep their budgets balanced in order to make ends meet. But the same has never been true of the U.S. federal government, which has routinely run budget deficits by spending more than it brings in through taxes and other revenue sources. Budget deficits have been a bipartisan effort, with Republicans and Democrats trading positions of power in Congress and the White House without having found any permanent resolutions to the issue.

In October, the Treasury Department announced that the budget deficit for fiscal 2018, which ended on Sept. 30, rose to $779 billion. That was up from $666 billion the year before, marking the third straight year of higher deficits. 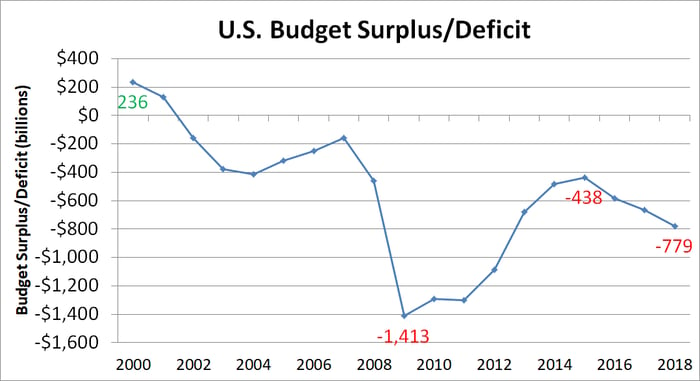 Rising deficits were largely expected for several reasons. First, tax cuts that took effect at the beginning of calendar 2018 reduced the amount of quarterly tax payments that taxpayers paid to the Treasury during the first nine months of the year. Also, rising interest rates forced the federal government to pay more in interest on the national debt, which currently stands at more than $21 trillion. And finally, an increase in inflation contributed to higher government spending for several key programs.

Unfortunately, deficits are likely to get even bigger in future years. This year's deficit was held down somewhat by one-time payments of deferred taxes by U.S. corporations with foreign operations, and interest rates remain on the rise, boosting borrowing costs for the federal government.

With current projections for more than $1 trillion in deficits for fiscal 2019, many expect debate in Washington to center on what combination of spending cuts and tax increases is most appropriate to get the U.S. government on a firmer financial footing. Yet given the past track record of lawmakers and presidential administrations in addressing the issue, Americans shouldn't expect a quick resolution to budget deficits anytime soon.