The holiday season is a huge time for gifts, but it isn't often until after New Year's Day that the bills start coming due. In addition to having to make sure you pay off any big credit card balances you rang up, you'll also want to pay close attention to figure out whether there's any possibility you'll have to pay gift tax to the Internal Revenue Service.

Gift taxes can be exceedingly high, with current federal rates of as much as 40%. However, there are a number of exclusions from the gift tax that generally means that only the wealthiest of taxpayers has to worry about paying anything to the IRS. That said, there are some requirements to inform the taxman about your situation to avoid any misunderstandings. The following should tell you everything you need to know about how the gift tax system works and whether you'll need to plan to write another check to pay tax. 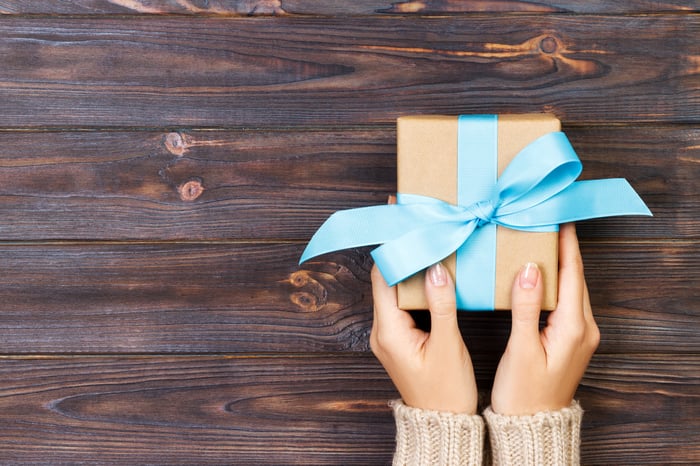 The basics of the gift tax

Rather than having one system of taxation for gifts you make yourself and another for gifts made from your estate after your death, the IRS operates a unified gift and estate tax system. Any transfers are potentially subject to tax, and the most important thing to understand is that it's always the person who's giving the gift -- or the estate for bequests -- that's liable for any tax due, not the recipient.

Technically, the way the gift tax laws read, any gift -- no matter how small -- could potentially be subject to tax. However, there was never any intent from lawmakers to subject every single gift to tax. Therefore, they wrote into the gift tax laws several provisions that keep most people from ever having to worry about the tax.

The most important is the annual exclusion amount. Every year, you can give up to a certain amount to anyone you want without having to deal with the gift tax at all. For 2018 and 2019, that amount is $15,000.

With the annual exclusion provision, you're allowed to make multiple $15,000 gifts to as many different people as you want. For example, if you have three children and you want to max out your giving, then you could give a total of $45,000 without any gift tax consequences.

The logical question to ask is what the consequences are if you end up giving somebody more than the annual exclusion amount. In that event, you'll end up having to file a gift tax return with the IRS. Form 709 is the form on which you'll report the amount of the taxable gift. So for instance, if you gave someone $20,000, you'd report that amount, subtract out the $15,000 annual exclusion amount, and then have $5,000 left over.

However, that still doesn't mean that you'll actually have to pay any tax. The reason why is that on top of the annual exclusion amount, there's also a lifetime exemption from gift and estate tax that you're allowed to use. For 2018, that amount was $11.18 million -- far greater than most people will ever need to use. In 2019, the exemption rises to $11.4 million. Unlike the annual exclusion amount, the lifetime exemption applies to all the gifts you make, rather than on a per-person basis.

Taking the example above, say that you gave $20,000 in gifts to someone just after New Year's. You'd have a taxable gift of $5,000, and that would use up a small piece of your $11.4 million exemption. However, you'd still have $11.395 million left for future gifts during your lifetime or for money that you transferred to your heirs after your death.

The only time you actually pay any gift tax out of pocket is if you use up your entire lifetime exemption. That's very rare, and only a small fraction of Americans ever have to pay any gift tax.

Special rules that can also help you avoid gift tax

As if that weren't enough, there are some situations in which you can give as much as you want without worrying about gift tax consequences. They include:

Never be afraid to give

The holidays are a time of giving, and you shouldn't let fear of gift tax keep you from making your traditional gifts. With such generous tax breaks available, the gift tax is something that the vast majority of taxpayers will never have to consider -- let alone pay.

Gift Tax in 2019: How Much Can You Give Before Having to Pay? @themotleyfool #stocks Next Article
Current