Tax season is starting to draw to a close, and already, more than 75 million taxpayers have filed returns for the 2018 tax year. That's impressive, especially when you consider that taxpayers had to navigate brand-new provisions in the tax laws as a result of reform legislation in late 2017.

Early on, it looked as though many taxpayers would be disappointed with the new rules. Despite having expected taxes to go down, initial reports of refund amounts paid on some of the earliest-filed returns were discouraging. As of Feb. 8, refunds were down 9% from where they were the previous year, and it looked as though the tax reform would actually result in substantially lower tax refunds for Americans.

However, the refund numbers spiked higher in mid-February, hitting their peak in the last week of the month. As you can see in the chart below, the average refund amount has eased somewhat lower over the ensuing weeks, but the declines have been relatively small. The current average of $2,957 as of the most recent report is more than $1,000 higher than the original numbers reported early in the tax season. 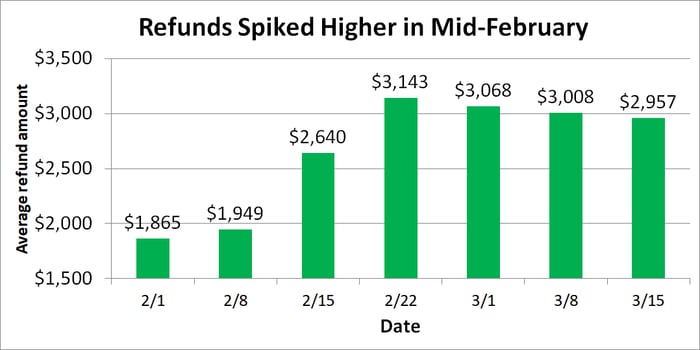 In general, people expecting big refunds file as soon as possible to get their money faster. However, if you're eligible to receive either the earned income tax credit or the additional child tax credit -- two of the most popular tax breaks -- then the IRS isn't allowed to issue those refunds until the second part of February. Therefore, the roughly 11 million refunds that were issued as of Feb. 8 didn't include any of the returns claiming these lucrative credits. Since then, the total number of refunds paid has jumped to nearly 60 million, with another $155 billion sent back to taxpayers over that five-week span.

As long as the laws forcing the IRS to delay refunds are still on the books, taxpayers can expect the same pattern to play out in future years. The lesson for the public is not to judge new tax measures based on just a few weeks' worth of returns. Only by waiting until the majority of refunds get paid can you have assurance that the trends you're seeing are actually real.

A Foolish Take: Taxpayers Are Getting Their Refunds After All @themotleyfool #stocks Next Article
Current