Please ensure Javascript is enabled for purposes of website accessibility
Log In Help Join The Motley Fool
Free Article Join Over 1 Million Premium Members And Get More In-Depth Stock Guidance and Research
By Dan Caplinger - Apr 15, 2019 at 11:01AM

It's only around now that you're done paying all your taxes for the year.

People hate paying taxes, and even as tax season has come to a close, the prospect of having to keep sending more money to federal, state, and local governments never stops being troubling. Even with tax reform having reduced federal taxes somewhat, Americans still spend a substantial amount of time working to pay tax authorities at all levels of government.

Each year, the Tax Foundation calculates all the taxes that Americans pay and comes up with what it calls Tax Freedom Day. The idea is to make taxes more concrete for people by figuring out how much of the year you have to work before you've earned all the money that will end up going to the government in taxes for the year.

This year, Tax Freedom Day falls on April 16 -- the same as the Tax Foundation's calculations for 2018. That reflects the roughly $5.2 trillion that Americans will pay in federal, state, and local taxes this year, about two-thirds of which will go to the federal government and one-third to state and local tax authorities. As you can see below, income taxes make up a larger part of total tax burdens than any other type of tax, but you'll find a host of other levies that play significant roles. 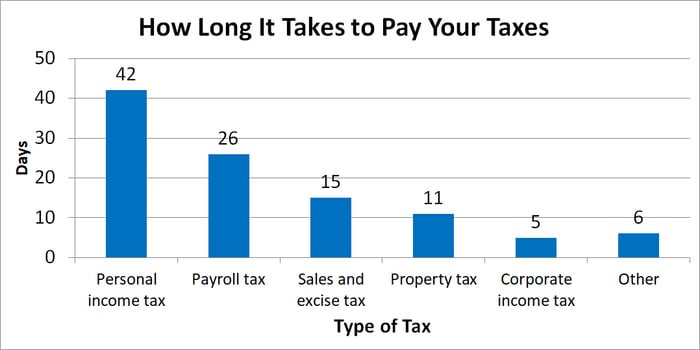 The impact of tax reform is evident from the way that Tax Freedom Day has changed over the years. In 2015, taxpayers had to wait until April 24 before they had freed themselves from their tax burdens. From 2017 to 2018, Tax Freedom Day moved forward by five whole days. That continued a trend of gentle ups and downs since 2000, when the latest Tax Freedom Day of May 1 was recorded.

When you incorporate deficit spending into the equation, the burden of federal borrowing pushes Tax Freedom Day well into May. However, what's particularly interesting is that looking at the deficit-adjusted Tax Freedom Day takes away most of its movement, with the date moving by just a day or two each year. For many, the idea that you'll spend more than a third of your year trying to earn money to cover both the taxes you pay and your share of federal borrowing is a stark reminder of how hard it is to save for your own financial needs.