As the end of the year approaches, tax season is almost upon us once again. Once January comes, many people will start clamoring to get their tax returns done as soon as possible to try to get their refund checks quickly. Others will simply bemoan the fact that they have to prepare a return by mid-April.

From a policy standpoint, income tax rates have gotten a lot of attention lately. Given income and wealth inequality, some have suggested making changes to the tax laws to impose higher tax rates on high-income individuals. With the 2018 tax cuts having reduced the top rate from 39.6% to 37%, some believe the highest tax bracket should move in the other direction. In early 2019, Rep. Alexandria Ocasio-Cortez, D-N.Y., proposed a new 70% tax bracket on those making $10 million or more. Independent Sen. Bernie Sanders of Vermont has suggested a more moderate top rate of 52% but would increase tax brackets lower down on the income scale as well.

Those would clearly be sizable increases, but the new rates wouldn't be unprecedented. As you can see below, rates as high as 70% have been in place as recently as the 1960s. Going further back, even higher levies have been put into law, including an amazing 94% tax bracket during World War II. 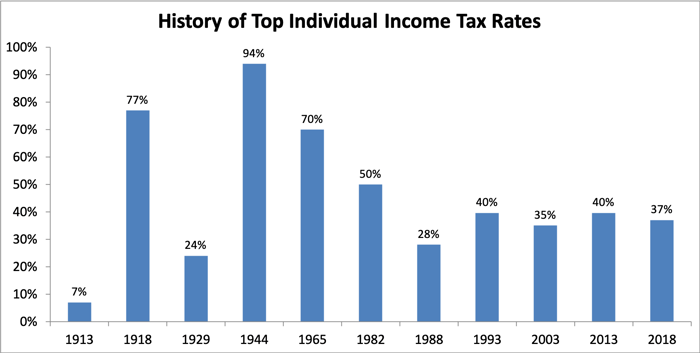 Comparing top tax rates from different eras isn't entirely fair, because it fails to take into account other provisions that can offset high tax rates. For instance, prior to the 1986 tax reform effort, there were far more deductions available to taxpayers, and so fewer people actually paid the rates of 50% and up that were commonplace at that time. By contrast, the post-1986 tax laws had fewer tax breaks, meaning that more people actually paid the lower rates that applied to income.

As the 2020 presidential campaign continues, you can expect taxes to remain near the center of debate among candidates. Unless one party or the other takes full control of the federal government in Washington, however, it could be tough for there to be any changes to tax rates until the most recent cuts sunset after 2025.