Tax season is almost here once again, and there aren't that many people who are looking forward to the task of preparing a tax return. Even with tax law changes having made it simpler for some people to file a return, just the stress of gathering up documents and making sure that you do all your calculations correctly is enough to make many people start to panic.

For many, the thought of being able to get out of filing a tax return might sound too good to be true. Unfortunately, most people do in fact have to file returns or else pay large penalties. Yet there are some rules that allow taxpayers not to have to file a tax return if certain conditions apply. Even for those lucky few, however, choosing to take advantage of those provisions and skip filing a return can end up costing you money.

The key to the main rules governing whether you have to file is how much the tax laws allow you to earn without having to pay any tax. If your income is under that amount, then the IRS makes it easier on you by not requiring you to file a tax return if you don't want to -- unless certain other conditions apply. 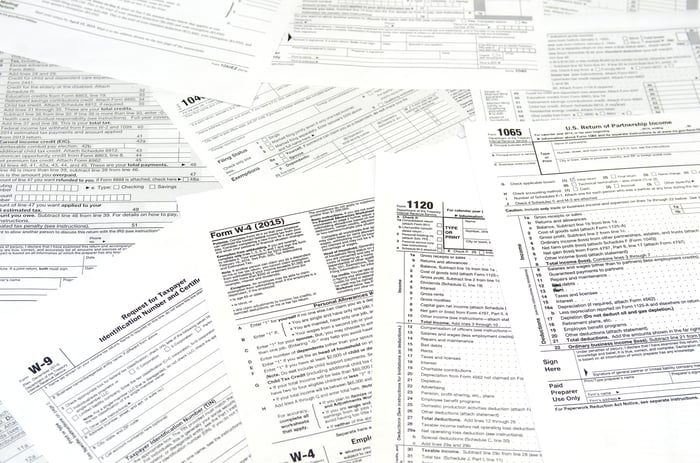 Each year, the amount of tax-free income you're allowed to earn changes. For your 2019 tax returns, the chart below covers most situations, and you'll just need to determine which filing status and age group you're in.

The rules for those who can get claimed as dependents by someone else are much lower. Typically, single dependents have to file if they had more than $1,100 in unearned income during the year, their earned income was more than $12,200, or their total income was above the greater of $1,100 or the sum of their earned income plus $350. Those age 65 or older can add $1,650 to those threshold amounts, as can those who are blind. For married dependents, the numbers are similar, except the add-on for being 65 or older or blind is $1,350 rather than $1,650.

Overall, these threshold numbers went up by a much smaller amount in 2019 than they did in 2018. That's because the amounts are based largely on the standard deduction you're allowed to take, and changes that took effect in 2018 dramatically increased the standard deduction. For 2019, the only adjustments were related to inflation, and so the amounts went up by hundreds of dollars instead of thousands.

Even if your income is below those thresholds, however, there are situations in which you'll have to file a return anyway. Those who owe alternative minimum tax or other special taxes will typically have to file, as will those who received distributions from health savings accounts or medical savings accounts. Self-employed individuals with earnings of at least $400 must file, as do those with more than $108.28 in wages from churches or related organizations.

In addition, if you received advance payments of premium tax credits or health coverage tax credits, then you'll need to file. Finally, those who have to include income on repatriated foreign assets are required to file a tax return.

How not filing can cost you money

Just because you don't have to file doesn't mean you shouldn't file. If you expect a refund because you've had too much money withheld from your paychecks, then filing is the only way to get that money from the IRS. Similarly, if you're eligible for tax credits that would put money back in your pocket, such as the earned income credit, additional child tax credit, or American Opportunity Tax Credit, then you'll want to file in order to claim your tax break and get that money sent to you.

In addition, those who want to start the statute of limitations for the 2019 tax year should file. Doing so starts a three-year clock for the IRS to do a regular tax audit, and that can put some taxpayers more at ease.

If you qualify not to file a tax return, it might seem like a dream come true. But before you skip filing, be sure you really do meet the guidelines, and also look to see whether you're costing yourself money by not doing the work to get your 2019 return done.