Please ensure Javascript is enabled for purposes of website accessibility
Log In Help Join The Motley Fool
Free Article Join Over 1 Million Premium Members And Get More In-Depth Stock Guidance and Research
By Travis Hoium - Apr 19, 2013 at 10:28AM

For decades solar power has been the dream of scientists and tree-huggers alike. It's one of only a few truly renewable power sources, and the only renewable source with enough potential to power the entire world.

For decades solar power has been the dream of scientists and tree-huggers alike. It's one of only a few truly renewable power sources, and the only renewable source with enough potential to power the entire world. To put the potential into perspective, there is enough solar energy hitting the earth in less than an hour to power all of our energy usage for an entire year. The Mojave Desert alone could provide more than twice as much electrical power as the U.S. needs using today's technology. The opportunity for this power source is tremendous, but until recently we haven't been able to capture the power in a cost effective manner.

First Solar has been on the leading edge of the solar industry for a decade, but cost has always been an issue for the company's expansion. As recently as 2004, it cost First Solar $2.94 per watt just to produce a solar module, and a full solar installation would be cost prohibitive to anyone but the wealthiest installer. By 2010, First Solar had cut costs to just $0.77 per watt, and it cost average consumers $6.98 per watt to put an entire solar system on their roof or $4.80 per watt for a utility scale project. That's when the industry kicked into high gear.

Today in the U.S., a residential installation averages $5.89 per watt, a commercial building will set you back $4.63 per watt, and a utility scale project costs just $2.90 per watt, less than a single module cost First Solar to produce eight years ago. The 40% reduction in utility scale projects has been driven by First Solar's large installations, which are able to take advantage of the company's large scale. 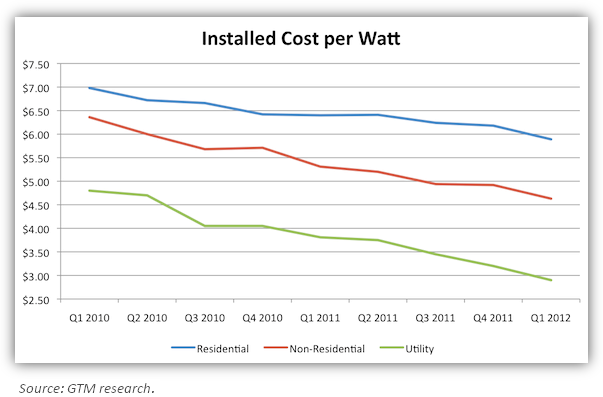 If we take a look at solar energy's largest market, Germany, solar costs just $2.24 per watt to install and 70% of installations are residential. This means that in Germany electricity from solar modules costs just $0.19 per kW-hr (assumes 15% capacity factor, 10% return, and 25-year life), a cost lower than grid parity in Germany and other high-energy-cost parts of the world.

Energy-hungry countries around the world are seeing solar as the next frontier, and the solar industry may pass 30 GW of installed capacity in 2012. For manufacturers who can survive, market is only limited by our desire for electrical power. By 2035, the U.S. Energy Information Administration estimates that the world will need 7,000 GW of electrical power, so even 30 GW of installed solar only scratches the surface.

This backdrop provides a huge opportunity for First Solar, but it also produced the biggest challenge to its very survival.

When First Solar rose to prominence in the mid- to late 2000s, the company was the first manufacturer to crack costs of $1 per watt and the only one able to make thin-film modules on a large production scale profitably.

The industry changed quickly, and rumors of the company's CdTe technology being overtaken by "better" technologies buzzed around the industry. But CIGS, amorphous silicon, and other promising discoveries never lived up to their hype and so First Solar sat atop the solar world all alone.

Up until the late 2000s little changed with this dynamic and First Solar was able to command a gross margin of up to 50% as the German market grew and markets like Spain and Italy popped up. But an older technology than First Solar's, based on crystalline silicon, began becoming popular in Chinese factories and low-cost suppliers began ramping up supply. Chinese banks handed out billions of dollars to companies like Suntech Power, Yingli Green Energy, and LDK Solar, despite little in the way of industry experience. Under all of the duress, First Solar hung onto its lead until 2011 when the Chinese made First Solar blink.

When 2011 arrived, supply from Chinese manufacturers, built at breakneck speed, reached an unsustainable level across the supply chain. Polysilicon, the raw material that forms the base of crystalline silicon modules that are First Solar's biggest competition, began to collapse in price. Material that once sold for $450/kg in 2008 fell to less than $30 per kg, and the cost to produce a module that was more efficient than First Solar's began to plummet. Over the past year, the cost per watt to produce a polysilicon module at Chinese leader Trina Solar has fallen far more quickly than the cost to make a thin-film module at First Solar, a trend that doesn't show signs of stopping. 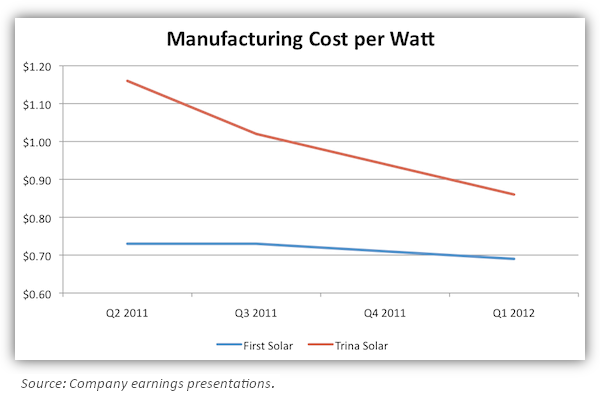 Since Trina Solar and its brethren in China make modules that are more efficient than First Solar, the company had to slash prices to compete. Gross margin plunged from 48.7% exiting 2010 to 20.9% in the fourth quarter of 2011 and just 15.4% in the first quarter of 2012. 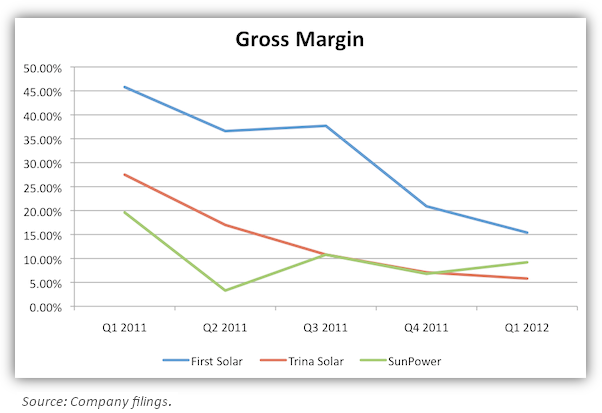 The recent results are concerning and should make any investor think twice, but there are some bright spots for First Solar and investors with a long-term view. Shares have recently traded at less than half book value, the company has $750 million in cash (offset by $864 million in long-term debt), and it still has a 2.7 GW pipeline of projects highlighted by a 2/3 share of projects exceeding 100 MW in size. This pipeline may be First Solar's saving grace if thin-film modules become uncompetitive with crystalline-silicon-based modules.

To combat the changing marketplace, First Solar has announced a strategic change to move system and module sales to more sustainable markets where solar is competing with grid parity like the Saudi Arabia, India, and Texas. Management says that by 2016, 3 GW of sales will come from these sustainable markets.

No one can beat First Solar's systems expertise to make this shift successful, and long term this is where the value in the company lies. With competition only growing stronger, I don't see modules being the driver of First Solar any longer.