"Leadership is the capacity to translate vision in to reality," according to late scholar and author Warren Bennis.

That's a pretty good definition of leadership, but it's not an easy one to accomplish. However, the CEOs of Celgene (NASDAQ:CELG), Cognizant Technology Solutions (NASDAQ:CTSH), General Electric (NYSE:GE), MasterCard (NYSE:MA), and Texas Instruments (NASDAQ:TXN) have been able to achieve this translation very well.

You don't have to run a huge enterprise to benefit from the experience and wisdom of the heads of these outstanding companies. Here are five leadership lessons from these exceptionally successful CEOs that are applicable to leaders of organizations of all sizes. 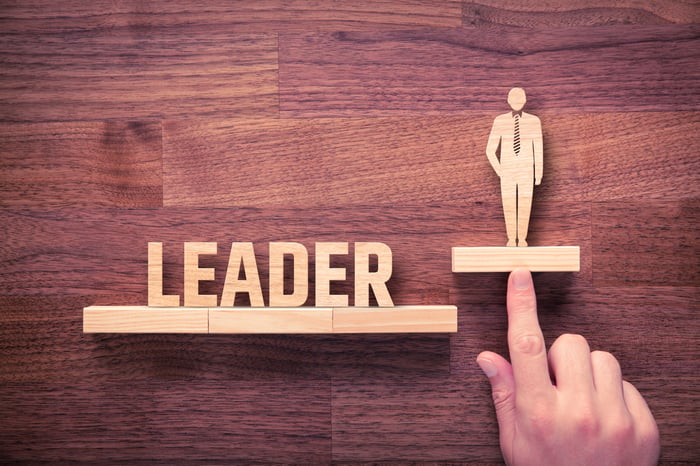 Mark Alles was named CEO of rapidly growing biotech Celgene in March 2016. Before taking the helm, Alles served as president and COO of the company. He joined Celgene in 2004.

Alles says some of the most important leadership lessons he learned came from his time as an officer in the U.S. Marine Corps. In an interview last year with Life Science Leader, Alles stated that the "idea that you must stay focused on developing and establishing the best people at all levels of the organization is something I learned very early as a Marine."

Celgene seems to like having former Marines in the top spot. Alles' predecessor as CEO, Bob Hugin, also served in the Marine Corps. So did Hugin's predecessor, John Jackson. The Marines' core principle of developing people at all levels of the organization appears to have paid off for Celgene. It ranked as the best big biotech stock of the past five years.

Francisco D'Souza was one of the founders of successful international consulting company Cognizant. His tenure with the company dates to 1994, when it was still part of Dun & Bradstreet.

In D'Souza's view, the key to effective leadership is in understanding change and moving quickly. He believes that leadership is "about rapidly understanding the context, having the courage to set a direction based on that understanding of the context, and then building a team and inspiring that team to follow and pursue that direction." D'Souza thinks the best way to accomplish this is to trust and empower staff at the front line, because they're usually the ones to pick up on change at the earliest stages.

This rapid assessment and response to change has been key to Cognizant's growth. The company has adapted as significant technology shifts occurred over the past two decades. Cognizant is now quickly shifting to the latest change by focusing on digital services and solutions.

Jeff Immelt took over the top position at General Electric from a business legend, Jack Welch, in 2001. Since then, Barron's has named Immelt one of the world's best CEOs three times.

GE is well known for its leadership training program. However, Immelt has stated that he's "paranoid" about making sure the company's leadership development doesn't fall behind. As a result, he has led GE to look outside the company every now and then to see what others are doing. In other words, Immelt's approach is to be a copycat. He's not too picky about whom GE copies, either, citing the U.S. Military Academy and even the Communist Party School in Beijing as sources of ideas.

This copycat principle doesn't just apply to developing leaders within the company. GE isn't reluctant to emulate others in its business operations. For example, the company has jumped into 3D printing to help lower costs and even made a couple of 3D printing acquisitions last year.

MasterCard CEO Ajay Banga: Have a sense of urgency

Ajay Banga has served as MasterCard's CEO since 2010. Banga joined the credit card payment company the previous year after a 13-year stint at Citigroup.

An alumnus of the Indian Institute of Ahmedabad (IIM-A), the top business school in India, Banga had an opportunity to speak about leadership to the school's graduates in 2015. His top advice about leadership was this: Have a sense of urgency. Banga said the world is moving too quickly for any leader to procrastinate.

MasterCard practices what Banga preaches. The company has rolled out bundled services that enable it to compete effectively in the marketplace. MasterCard has also made strategic acquisitions to quickly adapt to changing technology, including buying NuData Security for its passive biometrics software that can detect if a user is authorized by how fast he or she types a password or holds a smartphone.

Rich Templeton became CEO of Texas Instruments in 2004. He joined the technology company in 1980, right out of college. Institutional Investor has named him among the top-ranked semiconductor CEOs multiple times.

When Templeton spoke to graduates at the University of Texas at Austin, his parting words of wisdom were "don't be afraid to give back." His meaning is applicable in several ways. One is by helping others succeed just as others have helped you to achieve your goals. Another is to give back to the community, something that Templeton does in Texas.

Templeton also applies his advice to the graduates to the context of giving back to the organization where you work. He says much of his energy goes into leaving TI stronger than it was when he became CEO. It appears that Templeton has attained his goal: TI's stock price has more than tripled since he took the helm.