Daniel B. Kline, Selena Maranjian, and Asit Sharma
(TMFDankline)
Author Bio
Daniel B. Kline is an accomplished writer and editor who has worked for Microsoft on its Finance app and The Boston Globe, where he wrote for the paper and ran the Boston.com business desk. His latest book, "Worst Ideas Ever," (Skyhorse) can be purchased at bookstores everywhere. Follow @tworstideas
Follow @worstideas

Work mistakes come in all shapes and sizes. Some will sink you with your colleagues, others will hurt your standing with the boss, and some even count as being self-defeating.

There are a few mistakes you can make in the office, however, that will kill your career momentum dead in its tracks. In some cases, these are easy mistakes to make -- situations you can fall into without knowing they're happening.

If you know what to watch out for, however, you can be vigilant. Three Motley Fool writers share some of the worst mistakes you can make while at work. Any one of three could damage your career, hurt your standing with your colleagues, or even cost you your job. 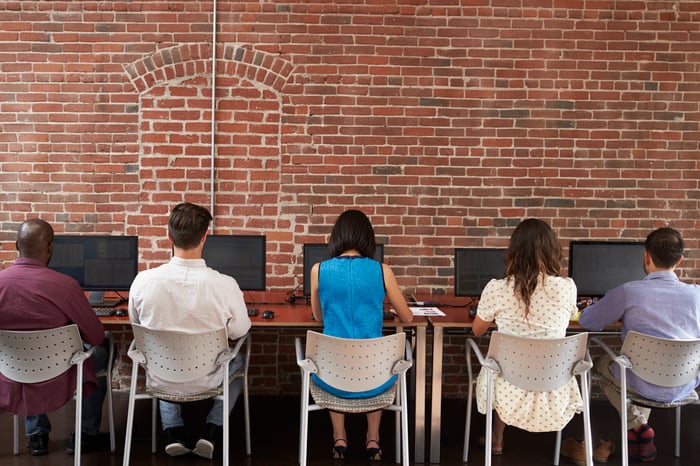 Not every job is perfect, but no matter what, you control how you perform. Image source: Getty Images.

Don't fall into a career depression

Asit Sharma: It's inevitable that at some point in your career you'll hit a true slump at work -- not a case of mild burnout, which can be cured by a week off at the beach, but a prolonged period in which you walk into work thinking, "Why am I here?"

Often these deeper spells of malaise signal that change is needed. You may be stuck in a position in which you've stopped growing, or you may have realized that your organization doesn't properly value you. Or maybe it's you, and your heart, intellect, and ambitions just aren't vested in what for someone else would be a perfectly good job.

Whatever the case, falling into a sort of career depression can be destructive if it goes on too long. In my opinion, the biggest mistake you can make at work is to just keep showing up when you're stuck, day after day. That's not fair to yourself or your co-workers, and it can go on for years if you don't deal with it.

So seek to address the root cause behind long-term doldrums. Try to fix the conditions under your control that are defeating your enthusiasm, and if you can't, it may be time to move on. If it's not feasible to leave in a short time frame, begin researching and planning your next steps. Just don't accept a slump as your permanent fate.

Taking credit for others' work

Selena Maranjian: A big blunder that some people make at their jobs is taking credit for other people's work and ideas. It might be done on the spur of the moment at a meeting, when you blurt out a good idea you heard recently to look good -- or it might happen if you give a presentation that an underling or colleague prepared or contributed greatly to, taking all the credit for it.

It happens all the time, which might make it seem not such a bad thing to do, but it can lead to a range of undesirable consequences. For starters, it isn't likely to go unnoticed. The person who isn't being credited may be watching or may hear about it -- he or she may have shared that same idea or work with others, after all, to whom it will seem familiar.

The people you're trying to impress may find out, too, and it won't make you look good. Whoever notices you taking credit for what others have done will be likely to conclude that you can't be trusted and may no longer want to share ideas or work with you.

And finally, understand that by giving credit to others, even when you give a little more credit than they may deserve, you put yourself in a good light. It can help you develop a reputation for generosity and fairness and being a team player, all of which are good leadership qualities.

Don't do a bad job

Daniel Kline: In my early 20s, I took a job at a magazine, running its fledgling website and doing a number of lower-level tasks. The position seemed like a good opportunity, but I realized rather quickly that it was not going to be everything I'd hoped it would be.

At the time, in what was my second full-time job, I lacked the workplace skills to work on the situation with my boss. So instead of trying to fix the situation, I mostly put my energies into the parts of the job I liked and ignored the ones I didn't. That made me a standout employee in some of the more visible areas of my job, but a terrible one when it came to certain tedious tasks I was supposed to be performing.

I was doing a bad job because things hadn't gone exactly the way I'd expected them to. That's something I regret, but it's an easy trap to fall into when you expected work to go one way and it goes another.

Whether you like your job or detest it, you have a responsibility to do it well. It's OK to quit when a job proves to be less what was promised, but while you hold the position, you must perform it to the best of your abilities.