Please ensure Javascript is enabled for purposes of website accessibility
Log In Help Join The Motley Fool
Free Article Join Over 1 Million Premium Members And Get More In-Depth Stock Guidance and Research
By Maurie Backman - Jul 6, 2017 at 7:18AM

Transit woes getting you down? Here's how to cope.

Though the average U.S. commute is roughly 26 minutes, in some areas of the country, you might spend triple that amount of time on the road, all in pursuit of a paycheck. And while some people don't mind commuting, there are also those who loathe the idea of sitting in traffic or squeezing onto a crowded bus and knocking elbows with strangers for an hour or more.

If your commute is getting you down, you're definitely not alone. Here are a few ways to make the best of it. 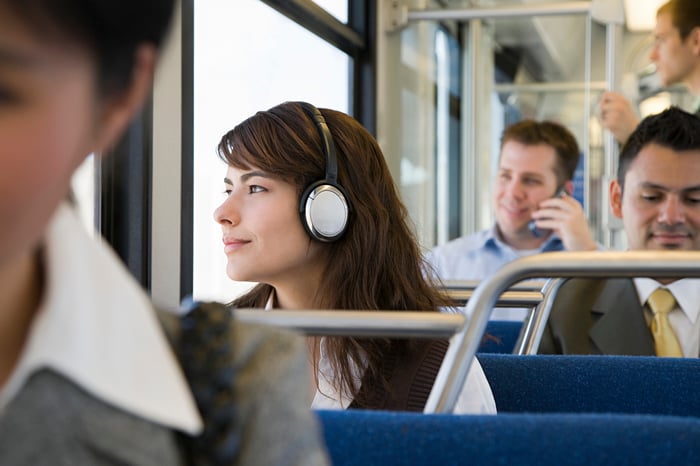 A big reason why so many people hate commuting is that they look at it as a major waste of time. But if you use that time to your advantage, you may come to loathe that commute a bit less. If you take a bus or train to and from work, try busting out your laptop and working on whatever it is needs your attention, whether it's a presentation or a string of unanswered emails. If you drive, you might use the time to catch up on phone calls, or play that educational podcast you've been trying to listen to for weeks. While you may not accomplish as much as you would from the comfort of an actual desk, making good use of your commuting time will help you feel better about the hour you spend going back and forth.

Another good way to stop thinking of your commute as a glaring waste of time is to find ways to make money while in transit. If, for example, you're a marketing professional who freelances on the side, working during your bus ride can negate some of those ill feelings about sitting in traffic. You might even find ways to make money during your commute if you drive. If you're a consultant, for instance, you might take a call from the road and bill your client for it accordingly. As long as you're able to provide the same level of service from behind the wheel, there's nothing wrong with doing so.

3. Use the time to recharge

It's a somewhat sad statistic that more than 40% of U.S. employees spend 50 hours or more per week on the job. Given the number of people who practically live at the office, it stands to reason that we could all use a little downtime. And that's how you turn a miserable commute into a pleasant one. Once you embrace the fact that you're stuck on the road, decide that you're going to use the time to do the things you wouldn't manage to squeeze in otherwise. If you drive, try listening to music or an audiobook. If you're a passenger on a bus or a train, this is a prime opportunity to read, relax, or even take a much-needed nap.

Of course, if your commute is really making you unhappy, you might try asking your company for the option to work from home, at least on a part-time basis. These days, a growing number of workers are moving over to telecommuting arrangements. Case in point: Between 2005 and 2015, the number of U.S. employees who do at least half of their work remotely grew by 115%. And as of 2015, there were an estimated 4 million American telecommuters in the workforce.

Finally, if working from home isn't an option and you're tired of feeling the pain of commuting, you might try getting a job closer to home. A study by Canada's University of Waterloo found that people who spend the most time getting to and from work experience higher stress levels across the board than those whose commutes are lighter. While commuting is often a part of life, that doesn't mean you shouldn't take steps to reduce the amount of time you spend on the road. And what you may lose in the form of a pay cut, you'll gain in personal happiness and sanity.