In many ways, a job interview is like a first date.

Both sides are trying to get to know the other, but some questions are off limits, even though one side or the other may really want to know the information. With dating, sometimes it's a matter of being impolite or too personal for an initial meeting. For example, you may want to know where your date stands on various hot-button political issues, or whether he or she has a family history of mental health issues, but those topics are best left for when you know each other better.

At a job interview, there are a number of things about which employers legally can't make inquiries. These vary based on where you are, but questions about marital status or whether you have kids, as well as religion or political party affiliation generally can't be asked.

However, there's one question that, while no longer legal in a handful of states and cities, remains something candidates get asked in many interviews. It's kind of a no-win position for the person being interviewed because revealing the information gives the employer leverage, and it could cost the job-seeker money.

For those, and other reasons, over half of Americans (53%) don't want prospective employers to ask them how much money they make, according to a new survey from Glassdoor. The survey, which was conducted online by Harris Poll, involved 2,224 adults ages 18 and older. 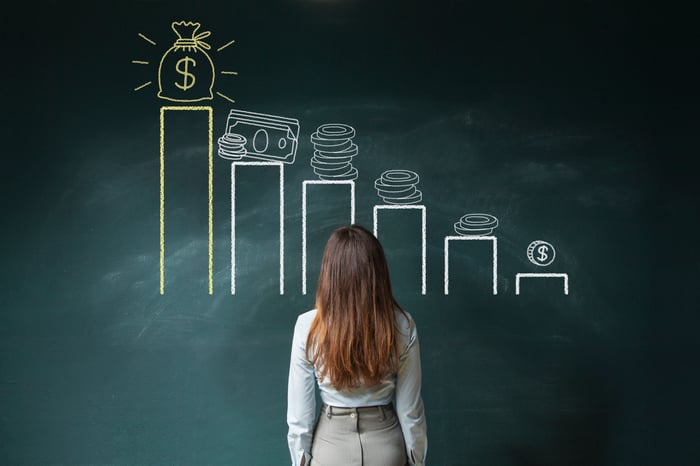 There is a salary gap between men and women. Image source: Getty Images.

More women than men believe that past or present salary information should be off limits during interviews. Only 48% of men were against salary history questions being asked, according to Glassdoor, while 60% of women felt the topic was inappropriate.

On average in the United States, women earn about $0.76 for every $1 men earn on an unadjusted basis, according to Glassdoor Economic Research. This pay gap may be due in part to the fact that 68% of women do not negotiate pay, according to a separate Glassdoor report, while only 52% of men fail to do that.

"The time of looking backward to go forward to determine pay is over. Asking prior salary history questions can trigger unintended consequences and introduce bias into the hiring process that disadvantages women from day one," said Glassdoor's Senior Vice President Dawn Lyon. "We need to reframe the conversation to pay expectations around the value of the job and the skills and relevant experience required to do it."

However, while the majority of Americans don't want to be asked how much money they made in the past, 98% of U.S. workers would like to see pay ranges included in job listings, according to Glassdoor. In addition, "95% say it is important to be thoughtful and informed about a company's pay philosophy (e.g., how pay and pay increases are determined) prior to accepting a job offer."

Employers should take note of that, because 72% of U.S. workers say the salary and the overall compensation package is a top factor when it comes to taking or declining a job offer. Making that information, or at least a salary range, available in job listings can save both the company and potential employees a lot of time.

Why do companies want to know what you make?

Imagine your current job pays $50,000 a year. Now imagine that a potential future employer knows your current salary and is hiring for a job for which it was prepared to pay $75,000; the company now has extra leverage. Because it knows your previous salary, it could for example, offer you $60,000 -- still a nice raise -- but less than the company had previously deemed the job to be worth.

Lyon believes job seekers in markets where it's still legal to ask about salary history must go into job interviews well prepared to deflect the question. It's not about being obstinate, but about trying to get an offer that's appropriate for the position, not one based on what you make now.

"Candidates can help change the conversation by offering answers that address their pay expectations based on the role and their current market value, while also taking into account how the company structures its overall pay and benefits package," she said.

Websites like Glassdoor make it possible for both candidates and employers to understand the general market for various jobs. That information should, in theory, make past salaries less relevant as a new job's compensation should be decided based on the job itself and the candidate's level of experience.

The fact that someone was underpaid (or even overpaid) on a previous job should ideally not factor into the offer, though of course, in many cases, it still does. That appears to be slowly changing, and job seekers can help hasten the change by being well-informed and armed with data when it comes time to talk salary and compensation.