We all have that one co-worker who makes an otherwise pleasant office environment perpetually intolerable. If you're dealing with a co-worker who's pretty much making you hate your job, here are a few ways to protect your career while preserving as much of your sanity as possible.

That co-worker who always takes credit for your achievements

You researched viable alternatives to your company's current process and came up with a cost-saving solution. Yet your co-worker failed to acknowledge your contributions during your team presentation and in fact managed to pass them off as his own. It's a scenario that's all too common, even in workplace environments that aren't necessarily known to be cutthroat. To avoid having it happen again, be sure to document your contributions thoroughly and establish a paper trail to keep that conniving co-worker at bay. 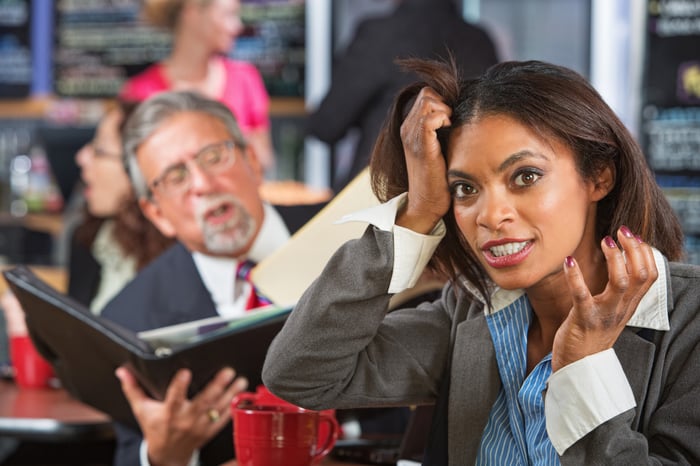 Furthermore, you might try erring on the side of updating your team and manager more frequently as a way of subtly offering proof of your accomplishments. That way, that credit-snatching co-worker will have a harder time passing off your successes as his own.

There are bound to be opposing sides in any given conflict, but there's a difference between arguing your case and refusing to acknowledge the possibility that you could ever be wrong. If you're dealing with a co-worker who thinks he's infallible, your best defense might boil down to a numbers game. Rather than take him on individually, round up a bunch of colleagues who see things your way and collectively try to get him to see the light.

Of course, the more irrefutable data you have to back up whatever point you're trying to make, the greater your chances of swaying even the most stubborn co-worker. But if you're dealing with the sort of person who will argue that the sky is, in fact, orange, without wavering, you may have no choice but to gang up on him a little.

You've prepared for your upcoming meeting and are ready to impress your boss and colleagues with your findings. There's just one problem: your loud-mouthed, intrusive co-worker who not only has the vocal capacity to speak over everyone else in the room but also has the gall to interrupt as a matter of course.

Though that sort of situation isn't easy, you can combat it in a number of ways. First, ask whoever's in charge of your meeting to set an agenda, and to give you the floor when appropriate so that you can share your input. Second, if you can't shut down your co-worker long enough to make your point, find ways to get it across in a manner that can't be interrupted -- like email. Though it may not be quite as effective as verbally stating your case in front of a group, if you're being shut down during meetings, follow up with a persuasive note afterward. That way, the worst the co-worker can do is respond.

Some people will stop at nothing to grow their careers, even if it means engaging in downright unethical behavior. If you have a co-worker who's willing to not just bend but blatantly break the rules, the best way to cope is to steer clear of that person as much as possible. You might ask not to be put on projects that co-worker is assigned to or even request to be moved to a different team to avoid consistent interaction.

If that doesn't work, and there's no avoiding that unscrupulous colleague, your next best bet is to file a complaint with your HR department so that there's something on record. Say your coworker pads your team's sales numbers in an attempt to snag a bonus. Not only is that dishonest, but if he's caught, he also might drag the rest of you down with him. Since confronting him probably won't do you much good, take the evidence to HR and let someone from there deal with the situation. That way, if his lie is unearthed, you won't be accused of conspiring with him.

Sometimes, all it takes is a single individual to make you utterly miserable at work. If you have a co-worker who's ruining your life at the office, you owe it to yourself to fight back. Just don't make the mistake of stopping to that co-worker's level. Otherwise, someone might write an article about how to deal with you someday.