Even successful relationships can sometimes have problems when money becomes an issue.

Some couples make the mistake of not talking about their finances. Others have trouble when one person has less financial discipline than the other, or conversely, when one member of the couple moves from "conservative" to "cheap" when it comes to spending.

Another huge possible trap for couples involves how much each person makes. This can be an even bigger problem if both people once made comparable salaries, and something happens that causes one person to start making a lot more.

It's a little easier to be gracious about any income disparity as the partner who earns more. If, however, you find yourself making less money than your significant other, it can be a bitter pill to swallow. You may not want to feel that way, or have ever thought you would. But emotions can be tricky, and they don't always leave us feeling the way we would have expected. 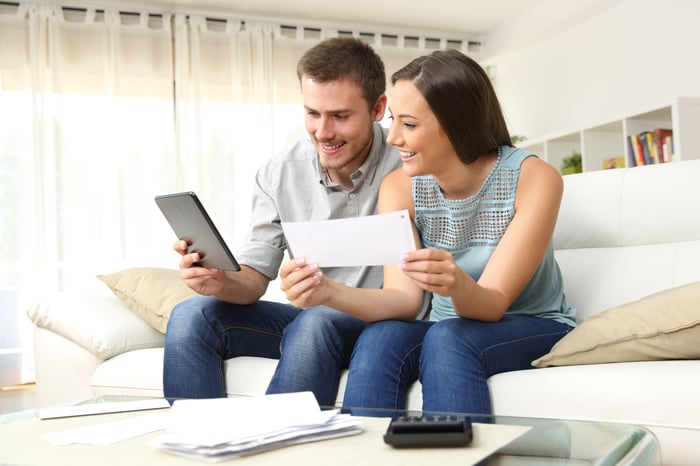 All couples need to talk about money. That's not always comfortable, but it's incredibly important. No matter how much each person contributes, when two people mix their finances they need a joint plan.

Ideally, that conversation happens before a couple agrees to live together or get married. In many cases that does not happen, and it takes a change in circumstances to force the conversation. A major change in income for one or both members of a couple can be a catalyst for a discussion.

What do you talk about?

You need to set your rules as a couple as to how money is spent. For example, some couples deal with major differences in their salaries by each contributing a percentage of earned income into a joint account to cover household expenses. Whatever money is not contributed becomes discretionary income, giving each partner income that they can spend without asking permission.

That works for some couples -- generally second marriages or people who waited until later in life to get married. In many cases, however, especially when incomes vary greatly, that setup can lead to resentment since one person will have more discretionary income than the other.

Other couples put all their money into a joint account and establish spending rules. My wife and I have used this method for the past 20 years. Basically, we look at our total income versus our recurring expenses and decide on a spending amount that either one of us can spend on discretionary purchases without asking.

There were times after buying a house or when my wife was finishing her Ph.D. that our spending cap topped out at a modest lunch. These days, we discuss furniture purchases or other major expenditures, but both have the leeway to buy what we want/need without consulting the other.

How to handle making less

Marriage and living together both require working at being a partner. If you make less than your significant other, it's important to honestly talk about how you both feel about that situation and how you might remedy it.

It's also important to note that contributions to a relationship are not only measured in cash. Growing up, my mother stayed at home while my father worked until my brother and I both went to school. She wasn't paid for her work, but it had a clear value in the relationship.

In a case like that, a supportive spouse can do a lot to mitigate any concerns the lower-earning spouse has. Of course, not everyone has a supportive significant other or one that's intuitive or empathetic enough to know that you may have negative feelings due to the income disparity.

When that happens, again, it's necessary to talk in order to find a balance in your relationship. That's not always about the person earning less doing more at home, because oftentimes jobs that pay less require more work. Instead, it's about talking things out so both members of the couple feel equal, even if one earns more.

It's wonderful to think that every couple considers the success of one member a triumph for both. In reality, that's not always true, and one person doing well can make the other one feel inadequate or highlight their frustrations with where their career is.

It's understandable to be a bit jealous of your significant other's success -- even though that success also benefits you. However, it's not OK for that jealousy to lead to resentment on either side of the couple.

That means that if your partner resents having to clear a purchase with you even though they make more money, then that needs to be discussed. The same is true if you feel jealous or inferior because your paycheck is smaller.

Talk and have a plan

Finding a balance as a couple -- no matter who makes what -- requires a lot of communication. That means making it clear to your partner that if making less causes negative feelings, it's not that you don't support their success.

You can be happy for someone and feel bad for yourself at the same time. If you talk about those feelings as a couple, you can formulate a plan to rectify the situation. That may mean your partner supporting your efforts to earn more money, or it may mean agreeing upon ways to maintain equality even when incomes remain vastly different.

There's no one simple solution to this issue because situations vary greatly. The only constant is that issues left not talked about, especially financial ones, can fester, creating deeper problems.