There's a commercial for a popular razor in which a man waiting for a job interview notices that all the pictures in the waiting room of the company's executives were of bald men with shaved heads.

The interviewee, one of many similar looking men in suits waiting to be interviewed, then runs out to buy a razor in order to shave his head. He returns to the room without hair and shares a knowing smile with the boss implying that his appearance will give him an edge.

In reality, it might. In a perfect world, job candidates would be judged solely by past experience, skills, how they interview, and their resume, but that's not always what happens in the real world.

How you look, what you wear, your religion, your name, even your height, or how you wear your hair can impact whether you get hired or not. That's certainly not fair and it's not how things are supposed to work, but it's how the real world works.

The people doing the hiring, whether they intend to or not, bring their own prejudices to the process. This may not be blatant discrimination, but it's a subtle problem that impacts who gets hired. 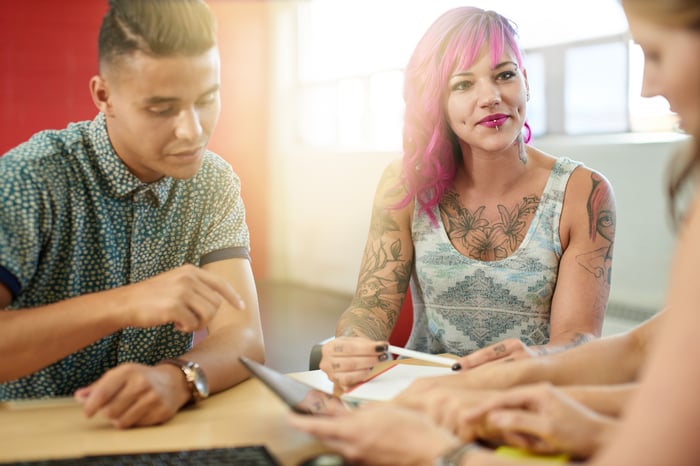 You sometimes need to look the part

A lot of Americans have tattoos and piercing that go beyond traditional earrings. In fact, about 3 in 10 (29%) have a tattoo, according to a 2016 Harris Poll, with younger generations having them in increasing amounts. Nearly half of Millennials (47%) and over a third of Generation X (36%) have at least one, well above Baby Boomers (13%) and what Harris calls "Matures" (10%).

In time, hiring attitudes toward tattoos (and by extension piercings) should change, but for now a prejudice remains. That's probably because the people doing the hiring are likely to be older, but a 2013 Salary.com survey of 2,675 people showed that tattoos can hurt your chances of being hired.

Not surprisingly the survey found that older people were less tolerant of tattoos. That's good news in a sense -- this prejudice has likely lessened since the survey was conducted and will continue to go away as Generation X and Millennials increasingly take over positions of power in the work world.

It's about getting the job

Many companies including Starbucks have relaxed or eliminated policies regarding tattoos. Others including Walt Disney continue to make employees cover any visible tattoos.

When it comes to getting hired, it's important to give the person conducting the interview what they expect. That may not be as extreme as shaving your head in order to look like the person doing the hiring, but it does mean making your appearance match the corporate culture.

If you have tattoos and/or body piercings, research the company's attitude toward them before your interview. If a company has a published policy on covering up body art in the workplace, that suggests heavily you should do the same during the interview.

It's not about fairness. It's unfair that a less-qualified candidate gets hired because he was in the same fraternity as the person doing the hiring. It's also unfair that a better-looking person may get the nod over a less pretty or handsome candidate, but both of those situations can happen.

When you enter an interview, your purpose is not to create social change, it's to get the job. Attitudes and prejudices toward tattoos and body piercings will likely diminish over time, the same way those toward men with long hair have become less prevalent. For now though, when approaching an interview (unless your research tells you otherwise), covering tattoos and body piercings likely gives you the best chance at being hired.

Will Your Piercing or Tattoo Prevent You From Getting Your Dream Job? @themotleyfool #stocks $DIS $SBUX Next Article
Current