Please ensure Javascript is enabled for purposes of website accessibility
Log In Help Join The Motley Fool
Free Article Join Over 1 Million Premium Members And Get More In-Depth Stock Guidance and Research
By Daniel B. Kline, Selena Maranjian, and Maurie Backman – Aug 9, 2017 at 7:35AM

Even a difficult situation can be an opportunity to learn.

You might get a screamer, or maybe a person who's mean just for the fun of it. Sometimes an awful boss can be the nicest person in the world, who also happens to be really bad at doing the job.

It's most certainly unpleasant while you work for a bad boss, but it's still possible to gain something form the situation. Looking back on some of the bad bosses many of us have had can teach us about dealing with one in the future. It can also show those of who hope to be in charge what not to do should you ever find yourself being a boss.

Here are some thoughts from three of our Foolish writers. 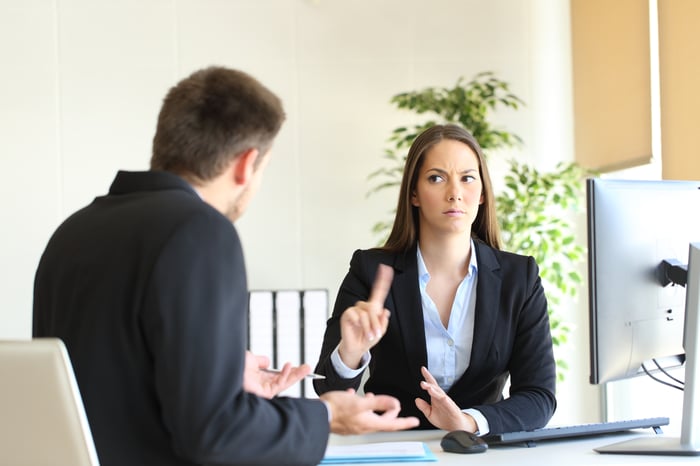 Not every boss you ever have will be good at being in charge. Image source: Getty Images.

Selena Maranjian: One thing many people don't quite realize about having a bad boss is that it means more work for you -- if you want to try to make the situation better for yourself. The kind of work you'll need to do will depend on the kind of bad boss you have.

If your bad boss means well, you may be able to make your work life less frustrating by doing some things a little differently. If your boss isn't giving you enough direction, you might ask for more. If your boss is a micromanager, you might try to stay ahead of him or her by anticipating the next group of demands coming your way and getting them done earlier than the boss expects.

Try to figure out your boss's motivations. For example, he or she may be insecure and wanting to look good to superiors. If so, you can help with that, by doing work that reflects well on the boss and perhaps even by giving the boss some credit. Sometimes a tactful conversation can help.

If your boss can't be managed and isn't likely to change, your best option is probably to move on to another job, with another boss. (When searching for a new job, be alert for any signs that your potential new boss is toxic -- you don't want to end up in a difficult position again.)

Of course, moving on to a new job is easier said than done. If it looks as if you'll be sticking around a while, here are some steps you can take:

You might ask to be transferred to another department, too.

Know When to Quit

Maurie Backman: To say that my old boss was abrasive would be a tremendous understatement. Though I respected his intelligence and work ethic, I was by no means OK with the way he treated me.

When he needed something, he yelled. When he was dissatisfied with something, he yelled some more. The majority of the language he used would not be suitable for your typical TV audience, and when he wasn't being vulgar, he was being downright unreasonable or condescending. Or both -- it really just depended on the day.

The funny thing was that this boss actually liked me. This wasn't a conclusion I came to myself; he told me, repeatedly, that he thought I was great at what I did, and he often praised my intelligence.

Of course, it wasn't just me he was consistently rude to; he treated everyone this way, including his peers. And because this was a small office environment with a pretty much non-existent HR department, he could easily get away with it. But after some time, I realized that things were just plain never going to change, and that's part of what drove me to eventually leave that job.

Sometimes, your boss can make or break your on-the-job satisfaction. But given the amount of time we all spend working, we deserve to be happy, or at least not utterly miserable, at the office. And if your relationship with your boss can't be fixed for whatever reason, it may be time to move on.

Learn to do the opposite

Daniel B. Kline: In a career where I have had more than a few bad bosses (along with some very good ones), my least favorite boss was one who put himself above his employees. He was not a bad guy. In fact, he was a relatively nice guy, but in a pinch when everyone was busy trying to keep the train from rolling off the rails, he never once lifted a finger to help.

In this person's mind, he was the boss, and his job was being in charge. He didn't answer the telephone, talk to customers, or make a pot of coffee, even if his entire staff was engaged in any of those tasks. He would literally let the phone ring or customers stand at the counter while he sat back performing some "boss" task that was not visible to those who reported to him.

It was a lesson in how to not be inspiring. I learned how not doing something could lead to employee resentment as easy as doing the wrong thing could.