Please ensure Javascript is enabled for purposes of website accessibility
Log In Help Join The Motley Fool
Free Article Join Over 1 Million Premium Members And Get More In-Depth Stock Guidance and Research
By Maurie Backman - Jul 17, 2017 at 7:36AM

Is your boss ruining your life day in, day out? Here's how to cope.

Sometimes, all it takes to make you downright miserable at work is one awful boss.

A boss who holds employees to a high standard isn't necessarily awful. Nor is a boss who isn't shy about offering criticism that's actually constructive.

So what does make a boss awful? If yours is egotistical, refuses to listen, uses derogatory language, or makes unreasonable demands, then you have it pretty bad. The same holds true if your boss is never satisfied with your performance, or anyone else's for that matter, yet fails to offer one useful piece of advice on how to improve.

If you're convinced that your boss is downright awful, here are a few tips on handling the situation -- without compromising your job or your dignity. 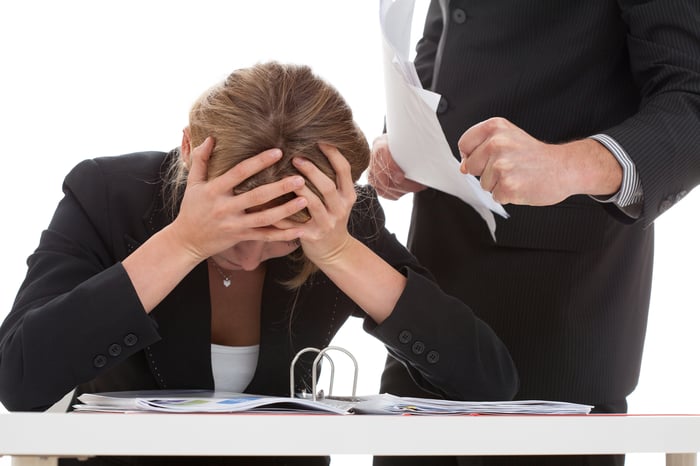 1. Understand what sets your boss off

Some people are naturally hot-headed and impatient. Once you identify the sort of behavior that's likely to cause your boss to go off on a rant, you can take steps to avoid it to the most reasonable extent possible.

Here's an example. Say your boss doesn't like it when others disagree with him, even if politely. If you're at a meeting and your boss is outlining a process you know is wrong, don't speak up then. Rather, go back to your desk, gather some irrefutable proof of your claim, and send that information his way in an extraordinarily polite email. He may still get annoyed, but he'll have a harder time blowing his stack. And he might actually come to appreciate you pointing out his blunder via email, as opposed to in front of others.

Sometimes people just plain clash. If you're looking to improve your relationship with your boss, ask for a sit-down and talk through some of the problems you seem to be having.

For example, say your boss yells at you every time you ask for help. You don't like being yelled at, but your boss might be frustrated with the fact that he's rehashing something he thinks you should already know. If you come up with a solution together, you'll be less likely to butt heads going forward.

That said, though an honest conversation can work wonders for your relationship, you'd be wise to err on the side of diplomacy, or even engage in a small degree of kissing up. Will your pride take a bit of a beating? Maybe. But if you come across as haughty or confrontational, it might set your boss off even more, compounding the problem you were trying to solve.

3. Don't stoop to your boss's level

It's not easy to stand there and let your boss treat you with disrespect, but no matter what you do, resist the urge to reciprocate. Sure, it might feel good to hurl a series of harsh words his way the next time he goes off on a rant, but if your boss has a tendency to use foul language, don't counter his tirades with your own series of unsavory verbal bombs. Instead, keep things professional on your end and do your best to resolve the situation in a civil manner. Of course, if you ever feel your own job-related anger getting out of control (meaning, you're finding it harder and harder to bite your tongue), it may be time to start looking for work elsewhere -- especially if you can't manage to shake those feeling once you leave the office.

There's a difference between an irritable, hard-to-please manager and a boss whose behavior is unethical, illegal, or in violation of company policies. If your boss is the latter, make sure you document every incident you witness, whether it happens in person or over email or the phone.

The simplest way to do this is to create an online spreadsheet (like a Google Sheet or something similar that your company can't tamper with) listing the date each incident occurs, the specifics of each incident, and any fellow employees who may have witnessed it. If you have evidence to support an incident, such as a nasty email, forward a copy to your personal account so you can save it on a non-work system or computer. (If nasty emails are a recurring thing with your boss, you may want to create a sub-folder in your personal inbox and store all copies there so they're organized and easily accessible.) This way, you'll have a leg to stand on should you need to bring these problems up with your human resources department. And that leads to our final piece of advice...

HR folks aren't just responsible for setting policies and handing out manuals. Part of their job is to ensure that employees -- all employees -- are being treated with respect. If, despite your best efforts, you're unable to improve your relationship with your boss, and she continues to mistreat you, it's time to get your HR partner involved. And that's when you'll want to whip out that detailed file you've been keeping on your boss -- to show the extent to which the situation has gone from troublesome to downright unbearable.

What might happen next? That will depend on the circumstances at hand and your company's policies. Will your boss retaliate? Maybe, but once HR is looped in, she'll have a harder time getting away with bad behavior.

There's nothing like a bad boss to turn an otherwise decent job into an utter nightmare. If your boss is a terrible human being to work with, don't just resign yourself to a period of extended misery. Rather, try to do something about it, whether it's reasoning with the aforementioned tyrant or enlisting the help of your HR team.

That said, there comes a point when you can only deal with so much. If, after going through the above motions and filing a complaint with HR, you're still not seeing an improvement, you may want to dust off that resume and start looking elsewhere. You deserve to be happy at work, and if your boss is making you miserable, you're better off picking up and leaving.