Over-the-top incompetents like Michael Scott on The Office or tyrants like The Simpsons' Mr. Burns simply make for better TV. In real life, however, truly good bosses are actually equally rare. It's not that there are not lots of well-meaning people in charge and lots of decent bosses; it's just that that the path to becoming boss often does not prepare someone for the job.

Many offices promote via seniority, and while experience matters, it's not a good predictor of who will be good at being in charge. In addition, many companies don't place a lot of value on managing others as a skill, so the person getting the top job may be great at something else (usually sales) but not so good at managing people.

A few of us Fools, though, have been lucky to have some great bosses along the way. Here's what we have learned from these great bosses, and how it has made us better. 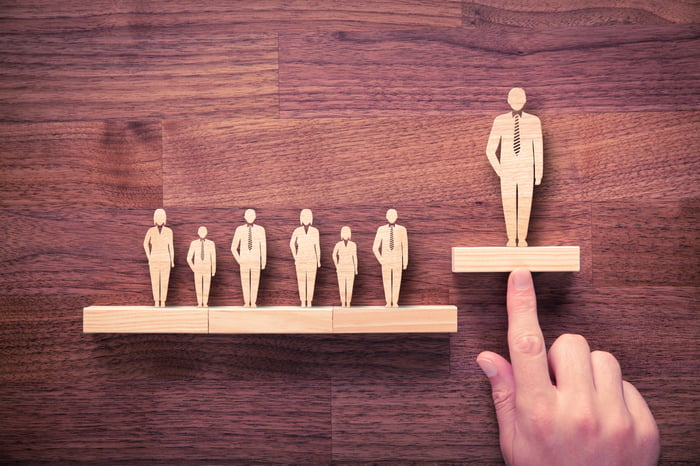 A good boss does more than tell people what to do. Image source: Getty Images.

Maurie Backman: I once had a boss who was extremely tough not just on me but on our entire team. The first few months were frustrating; it seemed like no matter what any of us did, it just wasn't good enough for her. But after some time, I came to realize that she was absolutely right in her demands.

Case in point: I once sent her a presentation that took hours to complete. I proofread it, checked it for holes and consistency, and did everything I thought possible to ensure that it would meet her approval. No such luck. Within minutes of reading it, she sent back a marked-up version that initially left me flabbergasted. But convinced as I was that I'd gotten it right, once I read through her comments, I realized how much room there actually was for improvement.

It didn't take long for me to recognize that having a boss with high standards was actually a great thing for my career. Not only did she encourage me to constantly push myself to do better, but she made me appreciate the value of constructive criticism. These days, I take the lessons she taught me to heart, and am constantly pushing myself to do the best job possible -- even if it means spending more time than somebody else would on a given task or assignment.

How to be a great boss

Selena Maranjian: I had had a good boss before I had a great one, and it was a revelation what a difference a great boss makes. A key thing that you can learn from having a great boss is how to be one yourself.

So what, then, defines a great boss? Well, instead of being someone who just assigns and oversees your work, he or she will help you grow in your job. A great boss will have your back and will coach you to be better at your job -- perhaps setting professional development goals with you, or responding to the ones you set for yourself in annual reviews.

A great boss will give you opportunities to shine, such as maybe having you give a presentation to management or giving you credit on a project you worked on. A great boss will try to remove obstacles in the way of your doing a great job -- such as when someone in another department is holding up a project you're working on.

Here are some more signs of great bosses: They hold you accountable, but hold themselves accountable, too, taking blame when needed. They can admit failures, learn from them, and help others learn from them, too. They listen to their workers and really hear their employees' challenges and frustrations. They don't play favorites and they're clear in their expectations.

Great bosses are inspiring, making you want to do right by them and help your team and your company do well. When you have a great boss, it can help you be a great boss, too.

Daniel B. Kline: One of my early bosses was in charge of me during my first summer earning a paycheck at the summer camp that I had attended the previous six years. My age group was not yet counselors or even counselors-in-training -- we were essentially maintenance helpers.

it was our role to do anything from fixing broken toilets to moving rocks around, after a camp tradition called "Gold Rush" where groups gathered rocks painted gold. Our boss supervised our group, but also had much broader management experience. Nothing in his job description said he ever needed to lug rocks alongside us, but he often did.

The moment I realized that this boss was how a boss should be came when I was given the task of using a scythe to clean out some overgrown areas. It was miserable work under the hot sun, with bugs and various prickly bushes seemingly fighting over which one got to bite or cut me.

It was a multihour task, and a little ways in my boss appeared next to me. He didn't say much, he just grabbed a scythe and started cutting. We both worked for hours and then spent the next few days bonding over severe cases of poison ivy requiring taking medicine.

My boss did not have to be there. He could have spent his day at his desk, or walking around checking on his many subordinates, but he chose to take on the toughest task because he could. That was a lesson repeated many times that summer, and one I have always tried to live up to when I am the boss.