Very few people like being criticized, but handling criticism well can lead to growth both in your career and as a person.

Of course, context matters. If you have a yell-first, think-later boss who screams insults, you're not likely to learn anything. One the other hand, if you have a thoughtful superior who offers criticism to make you better, then it's important to learn how to handle that.

In many cases, as workers and as people we are blind to our own faults. Even in cases where someone develops self awareness, he or she may not judge errors or areas that need improvement with as harsh a brush as an outside perspective might. 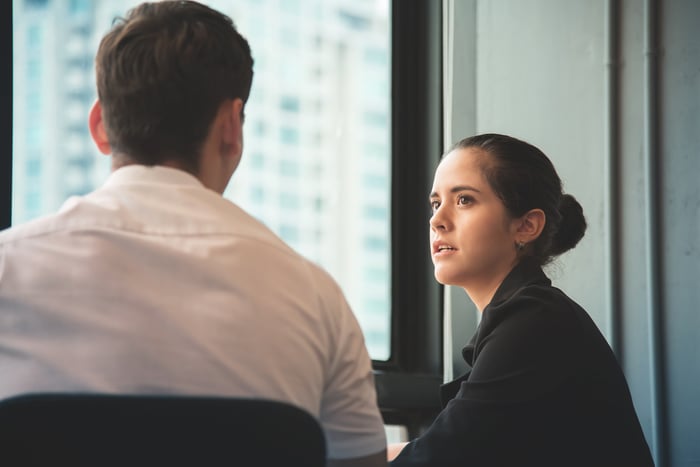 How you process criticism can dictate your successor failure. Image source: Getty Images.

If a boss takes the time to critique your work and goes through the trouble of mixing in compliments with his or her critiques, then he or she deserves having to thoughtfully considering the advice. Even if you've been taught a different way or think your boss is wrong, it's a mistake to reject the advice or be defensive.

It's also a very bad idea to dismiss your superior's suggestions out of hand. It's OK to offer context or push back a little if you truly feel the boss has missed something, but that's a dangerous approach, and you should generally try to process and embrace the critique.

As a writer who has worked for old-school editors who pulled no punches, I'm fairly used to blunt critiques of my work. That's a tough skin built up through years of peer critiques that began in college, where my friends delighted in telling me what I had done wrong.

Despite that history of taking well-intentioned, if sometimes mean, criticism, when one of my current bosses brings up something to work on, my initial reaction may flash negative. In my head, my first response may often be "Criticism? That can't be the case. I'm great."

That's a normal defensive response, and it's OK to acknowledge that feeling in your head, as long as you then let it go. After that initial burst, it's important to incorporate any suggestions into your work. Whether you were actually doing something wrong or your boss simply sees things from a different perspective, embracing constructive criticism makes you better.

Once you embrace criticism, it may not be any easier to hear, but you quickly understand how it can improve your performance. For that reason, sometimes it's a good idea to ask your boss or a peer to review your work. By doing so, you essentially give the person permission to not just point out faults or mistakes but also offer ways you can actually get better.

Putting yourself in a vulnerable position is never fun. I've asked editors for extra feedback and after hearing it have taken a few days to absorb the advice and regain my confidence, but ultimately I got the needed nudge to know what to work on.

You can always get better

The Beatles have some lousy songs, and Meryl Streep made Ricki and the Flash. Knowing that should be enough to allow us all to forgive our own failings as long as we work on getting better.

Take criticism as a positive. View it as an asset that lets you know where to direct your efforts. That may not make it easier to hear your boss or a colleague point out your weaknesses, but if you accept what that person says and build off it, you will be a better employee as well as a stronger person.