Don't get too hung up on that diploma.

There's a reason countless students are willing to rack up loads of debt each year in exchange for a coveted college degree. Not only are college graduates more likely to find jobs than those without degrees, but they also earn a median 67% more than those with just a high school diploma.

But while there's definitely a benefit to going to college and obtaining a degree, you may want to think twice before you overspend and accumulate a mountain of debt in the process. That's because in the grand scheme of your career, that degree will only get you so far. In fact, rather than put too much emphasis on that degree, you may want to focus on something that will really help you grow as a professional: people. 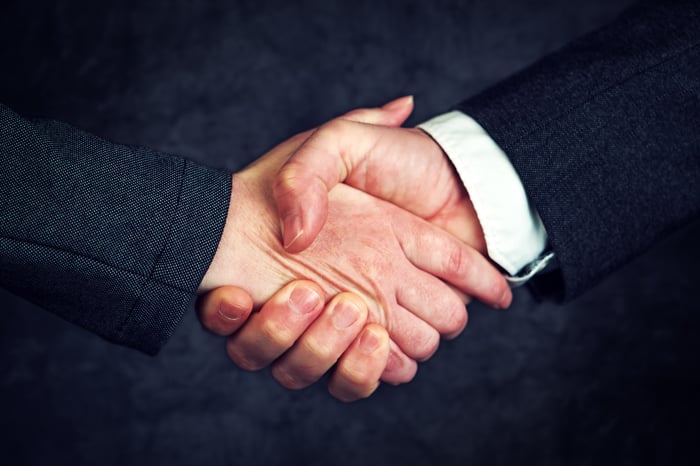 There's no question that networking and building business relationships are critical to a successful career. In fact, according to LinkedIn, between 2015 and 2016, 85% of jobs were filled via networking. But even once you land a job, it's still better to work on your people skills than fall back on a piece of paper listing your name and the college you went to. Here are just a few reasons why people are more important than your degree once you enter the working world.

1. Degrees are dated, while people are constantly learning and evolving

Of course, we all know that your degree is not, in fact, just a silly piece of paper but, rather, a summary of your accomplishments and credentials based on your studies. And there's nothing wrong with being proud of your degree or talking it up when you're looking for work. But the thing to remember about your degree is that it's dated. You got your degree at a certain time, and it represents everything you learned up to that point. But to succeed in any sort of career, it's critical to always keep learning. And that's where people have an edge.

Unlike your degree, people are constantly coming up with new ways to do things and exploring different ideas. Building relationships with folks in your industry can open your mind in ways a college degree just can't.

2. People can open the doors to new opportunities

Remember that networking statistic we referenced earlier? While your degree might render you suitable for a certain position, it won't help if the company that's hiring never learns about you in the first place. Recruiters and hiring managers often find themselves inundated with resumes from a seemingly similar pool of applicants, and if yours doesn't stand out in particular, you may not get a call.

On the other hand, knowing the right people is the best way to get your foot in the door at a new company or capitalize on a prime opportunity with your current employer. Say you've developed a relationship with a senior manager at an outside firm who knows you're gunning for a higher-level position. If a new role opens up, your contact might give you a first look or put your resume in front of the right people. But until that happens, your degree won't do you much good.

3. Recommendations carry more weight than a diploma or GPA

There's something to be said for graduating from a top university with a stellar GPA. But while your degree might very well speak for itself, you're actually better off getting live people to speak for you.

Imagine you're trying to prove to a company that you're capable of managing an accounting team. After all, you studied accounting in college and have the degree to prove it. But just because you learned certain skills in a classroom doesn't mean you're good at using them in practice. On the other hand, if your old boss writes a glowing letter of recommendation highlighting your accomplishments, it'll serve as proof that you're actually proficient in your field.

Furthermore, while a top-of-the-line GPA certainly never hurt anyone, most employers value real-world skills more so than grades. Acing a series of business exams for a 4.0 in your major shows that you're a strong test taker and responsible student; but having an old manager talk up your business prowess will lend confidence to your ability to get things done in the real world.

Though your degree will most likely serve as a stepping stone to a successful career, it certainly isn't the only thing to concern yourself with. Ultimately, it's the relationships you build that'll most likely make the largest difference in the long run.