Meetings: Like them or not, they're an integral part of corporate life. It's estimated that middle managers spend just over one-third of their time in meetings, while higher-level execs spend half of their time wasting away in conference rooms. But while you might resent the fact that meetings eat up such a huge chunk of your schedule, once you make the commitment to attend, you should know that certain behavior is just plain unacceptable. Here are some things you should never, ever do in a meeting -- no matter what.

Perhaps you're expecting an important call, or keep whipping out your phone to skim through some work-related emails. There are a million ways to justify being glued to your phone during a meeting, but at the end of the day, it doesn't matter -- you're going to look unprofessional. If you're really anticipating an urgent call, put your phone on silent, stick it in your pocket, and only check it if you feel a buzz. Similarly, any message that comes your way via email is probably something that can wait an hour, so focus on your meeting and then carve out some time afterward to respond at your desk. 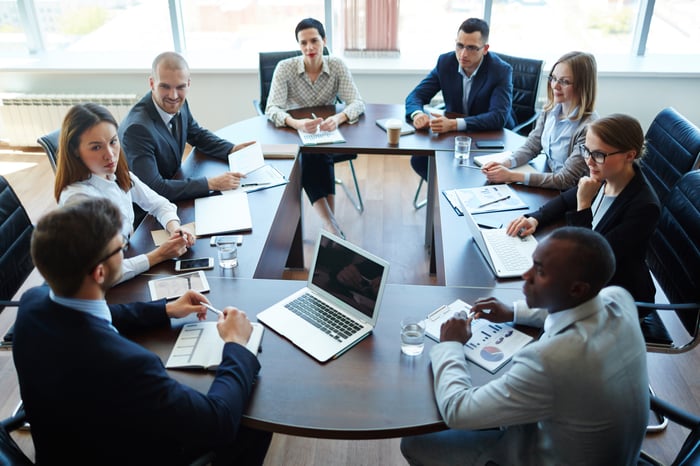 2. Type away on your laptop

It's one thing to take notes on your laptop during an important discussion. But there's a difference between documenting a few key points and hammering out your upcoming presentation while someone else is speaking. Not only will it become obvious that you're doing your own thing, but the sound of incessant typing could be enough to distract your colleagues or annoy the daylights of out them. Neither is what you want.

Perhaps your coworker's presentation is loaded with errors, or your boss has a tendency to use the same catchphrases so often you could actually make a game out of it. Be that as it may, there's never an excuse to be disrespectful when someone else is speaking. Furthermore, you might think you're being subtle when you roll your eyes or mutter some choice comments under your breath, but when you're confined to a small space, these things become noticeable. The next time someone says something you don't agree with, or something you find laughable, bite your tongue and avoid reacting.

Eating during meetings isn't necessarily taboo, especially if you're locked in a conference room during what would otherwise be your lunch hour. But if you're going to bring food to a meeting, make sure it's something that isn't overly messy or smelly. Otherwise, your meal will likely become the focal point of the discussion, and not in a good way. In other words, there's nothing wrong with eating a turkey sandwich while your coworkers take turns presenting. But potent fish and hard-boiled eggs are a definite no-no.

Remember that classic Friends episode where Chandler falls asleep in a meeting and winds up getting his job transferred to Tulsa, OK? If that doesn't highlight the dangers of falling asleep during a meeting, then nothing else will.

On a more serious note, nodding off during a meeting can hurt you in many ways. First, it can come off as disrespectful, even if that's not your intention. It could very well be that your kid kept you up the entire night before, but if you drift off mid-slideshow, your presenter's bound to chalk it up to boredom, and get offended. Furthermore, falling asleep puts you at risk of missing out on critical information you need to do your job. If you're feeling tired going into a meeting, grab a coffee or soda for backup energy. And if things really drag on, ask for a five-minute restroom break, splash some water on your face, and perk up.

While meetings can no doubt be a drag, and in some cases, a glorious waste of time, once you make the decision to attend a meeting, you'll need to act professionally throughout. Knowing what not to do during a meeting can help you avoid the sort of faux pas that could come back to haunt you.