Gone are the days when workers would get hired straight out of college, work their way up the ladder, and retire after 40 years of service to the same company. These days, job-hopping is practically a rite of passage, and changing jobs is something the typical worker will do 12 times throughout his or her career.

Of course, the motivating factor behind switching jobs is generally money. While staying at the same company will get the average U.S. worker a 3% pay increase, those who move on to new companies are likely to see their earnings grow nearly a percentage point more than that. But if you're not careful about jumping ship, you could end up canceling out that higher salary as a result of poor planning. 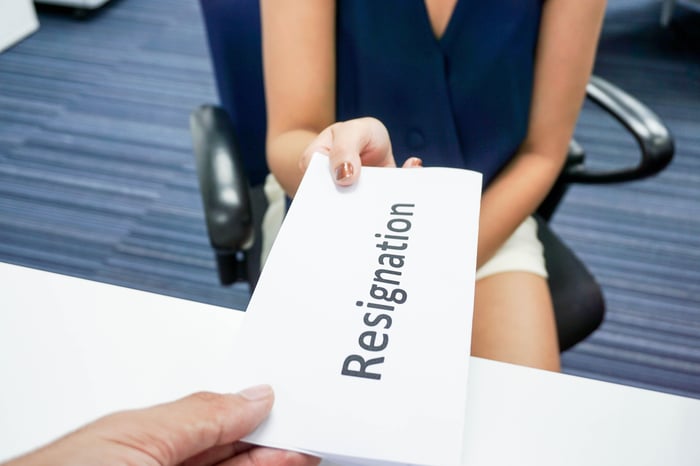 It's easy enough to be lured by the promise of a more generous salary, but before you go from one job to the next, think about how it might affect your 401(k). Though an estimated 92% of companies that sponsor a retirement plan also offer a 401(k) match, you could end up losing out on some of that cash, depending on your employer's payment schedule. For example, if your company awards matching dollars on a yearly basis, and you leave before that money hits your account, you'll probably end up kissing it goodbye.

Along these lines, you may have to forfeit some of cash that's already sitting in your 401(k) if it came in the form of matching dollars but you're not fully vested by the time you leave your job. In fact, the average worker who gives up matching dollars during a job switch loses $1,520, or 18% of his or her account balance, according to Fidelity.

Another thing to consider is that your retirement savings goals might suffer a setback if you're not immediately eligible to fund a 401(k) upon starting your new job. Some employers impose a mandatory waiting period for making contributions if you're new, so you may need to put your savings on hold for three months, a year, or even longer, depending on your company's policy.

Now imagine you're 30 years old and typically max out your 401(k) by contributing $1,500 a month, only you change jobs and get locked out of your new employer's plan for a solid year. Even if you pick up where you left off once you become eligible to contribute, you'll have lost out on not just $18,000 toward retirement, but whatever growth that money could've achieved. So if, for example, your investments typically deliver a 6% return, and you end up retiring at age 67, you'll have $155,000 less in your retirement account as a result of not having contributed that $18,000, thus forfeiting its associated growth.

An estimated 80% of workers get some sort of performance or job-related bonus, but if you leave your current job before you're eligible for that payout, you'll forfeit whatever sum would've otherwise landed in your pocket. That's why it pays to get your timing right when switching jobs. If you're offered a new position in November, but your present employer typically dishes out bonuses in December, it pays to see if you can postpone your start date at your new company in order to collect that lump sum.

Another thing to consider is that some companies offer sign-on or relocation bonuses that come with certain requirements, including the obligation to stay at a job for a certain period of time. If you received such a bonus, but leave for a new role before fulfilling your obligations under that bonus's contract, you may be required to repay a chunk of what you initially collected.

If you're getting health coverage through your current employer, it pays to research your new prospective employer's plan before accepting an offer, or to time your move strategically. Signing on to a new health plan in the middle of the year could mean resetting the clock on your yearly deductible, thus negating the fact that you may have already met your out-of-pocket maximum under your old plan. And that could translate into thousands of dollars depending on your coverage and the extent to which you utilize it.

Another thing to consider is that your new employer might offer an inferior health plan, which could cost you more in deductibles and copayments going forward. Plus, you may wind up paying a higher portion of your premium, depending on how generous or stingy your new employer is.

Finally, keep in mind that you may have a waiting period between when your existing health coverage lapses and your new health plan kicks in. Last year, almost 75% of new employees had to wait some amount of time before becoming eligible for coverage under a company health plan, with the average coverage gap lasting nearly two months. If you're forced to pay for coverage under COBRA during that time, you'll be on the hook for the full cost of your former plan, and not just the portion you may have gotten used to paying. And if you go without coverage during that lag and end up getting injured or falling ill, your finances could take an irreparable hit.

Though job hopping can offer a prime opportunity to snag an instant salary bump, and maybe a better title to boot, think about the monetary consequences you'll face before making a switch. In some cases, timing your notice strategically could be just the thing to prevent you from losing out financially during what should otherwise be a positive career move.