Unless you happen to work independently, there's a good chance you'll collaborate and interact with your fair share of coworkers during your career. And while some of those folks might be helpful, supportive individuals who build you up, you might inevitably come across some colleagues who are less than pleasant to deal with. But of all the toxic coworkers whose paths might cross your own, there's perhaps none as potentially dangerous as the one who tries to sabotage you and your career.

Whether it's rooted in jealousy, spite, or an unwavering desire to get ahead at all costs, you might one day come to face a coworker who will stop at nothing to bring you down and quite possibly land your very role as a result. You should especially be on alert if you have a coworker who: 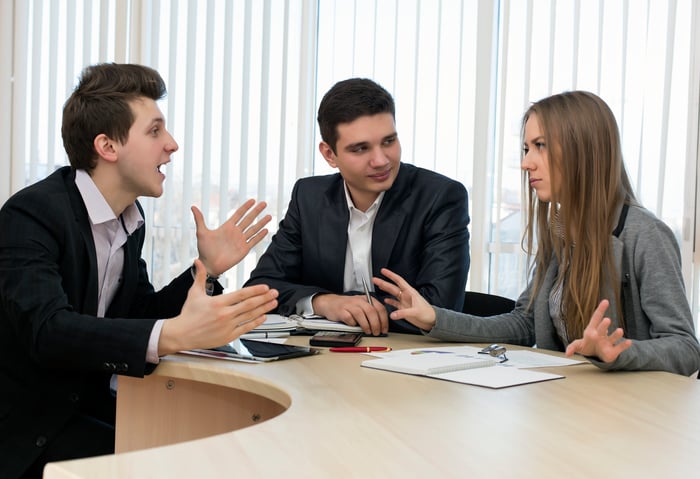 These are all major signs of sabotage, and you'll want to put an end to the madness before it gets out of hand. Here's how.

1. Determine the driving force behind your coworker's actions

Perhaps your coworker is deep in the sabotage game because he or she simply doesn't like you and therefore wants to see you fail. But a more likely scenario is that you have something your coworker wants, like a certain job title, or you're both vying for the same promotion. If that's the case, then there may be a way to diffuse the situation before things really get out of control. For example, in the case of the latter, you might gently inform your colleague that you're happy in your current role, and that the job in question is his or hers for the taking. This might put your evil coworker at ease and convince him or her to back off.

It's never easy confronting an adversary, but if it's clear that a coworker is trying to thwart your job-related success, it might pay to schedule a sit-down and attempt to quash that behavior. If your colleague comes to realize that you're on to his or her tricks, you might win an instant reprieve. Also, at the risk of crying wolf, it wouldn't hurt to mention that if things don't stop, you may need to involve someone higher up at your company. Nobody likes a tattletale, but if that's what it takes to nip your coworker's behavior in the bud, so be it.

If you have a coworker who is indeed trying to derail your career, there's a strong chance that he or she is not the most reasonable person out there, in which case having the aforementioned talk may not end up being effective. That's why it's critical to document all incidents in which he or she steps over the line or acts inappropriately. If, for example, your colleague sends you inaccurate data on purpose to throw off a major presentation, retain a copy of that erroneous report so you have it on file. Just as importantly, see if you can enlist the help of a few coworkers who have witnessed the saboteur's behavior and are willing to back up your claims.

4. Speak to your manager, or an HR representative

You should only be forced to tolerate so much ridiculous behavior before you seek outside help. If your coworker won't back down, it's time to talk to someone who can put a stop to all that insanity. Chances are your coworker's actions are violating some sort of official company policy, so once you've assembled that list of egregious incidents and witnesses, present it to your manager or HR rep and let that person take over.

No matter how you choose to deal with a sabotage-minded coworker, don't make the mistake of retaliating or stooping to that person's level. Challenging as it might be to keep your cool when someone is clearly stepping over the line, the more professionally you conduct yourself, the better you'll fare if and when your company's higher-ups inevitably have to get involved.