There are plenty of work-related reasons you might be looking to move: you may be fresh out of school, taking a step up in your career, or ready for a change of scenery. Compensation is, of course, a huge factor to consider -- and average pay can vary widely from place to place.

There's more to the decision than just salary. For example, a state's income tax rate and levies on consumer sales can impact how much of that new paycheck you bring home, as will cost of living. With those factors in mind, here are the 10 top-paying states in the U.S. 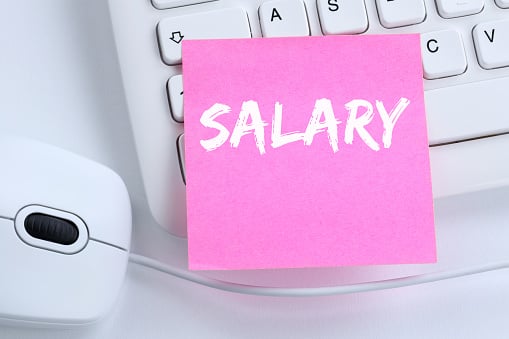 In addition, residents pay a relatively modest flat income tax rate of 4.63%. That's not a bad combination, particularly when compared to a few others on our list.

The folks in the state of Washington came in at No. 9 with median income of $67,243 per household. Washington residents hit their peak wage level way back in 1998, but as of the 2015 data were earning a mere 2.4% less.

Washington residents pay no state income tax, but as you may have guessed, the state gets its share in other ways, including taxes on most sales and a stiff gasoline tax.

Edging out Washington state by just over $600 a year to come in at No. 8 on our list is Massachusetts, with a median household income of $67,861. The average income two years ago was a 3% drop from the banner year of 2001.

As for taxes, Massachusetts imposes a flat 5.1% tax on income.

And given an income tax rate that can climb up to 8.97%, your income level will play a big part in how much or how little you take home.

Minnesota's $68,730 edges out New Jersey for the No. 6 spot on our highest-paying list. However, that's down 7.9% from what Minnesota citizens were earning in 2000.

And with an income tax rate climbing as high as 9.85%, the state is definitely going to claim its share.

Our fine representatives in Washington, D.C., claim the No. 5 spot on the list of top-paying states or districts with $70,071 per household -- the top compensation of any year, according to the Census Bureau.

Though D.C.'s top income tax rate can reach 8.95%, that's only for those making over $1 million annually; its district income tax begins at a more modest 4%.

And with a state income tax rate beginning at just 3%, and climbing to 6.99% for folks earning over $500,000, a Connecticut resident's net income is competitive with most any area in the country.

As in Connecticut, Maryland citizens earning the median household income won't be subject to much in the way of income taxes, considering its rate begins at just 2% and is capped at 5.75%.

Better still, with no tax on residents' income, Alaska is not only one of the highest-paying states -- it's also one of the tax-friendliest.

The top state in the country for pay is New Hampshire, with a sky-high $75,675, and it gets better -- unless you're a homeowner.

New Hampshire only requires its citizens to pay a 5% tax on interest and dividends, but it does not levy taxes on earned income, or on consumer sales. However, New Hampshire is well-known for imposing some of the highest property taxes in the country. But living in the highest-paying state, and paying no state earned-income or sales tax, should make writing a check for your New Hampshire home a little easier to swallow.

As it relates to competitive compensation, the East Coast is well-represented but hardly alone. With top-paying states in the Midwest, Northwest, and even way up North in Alaska, those of you seeking a new career with strong compensation opportunities have options throughout the U.S. But if salary is a key consideration don’t forget to take into account cost-of-living factors including state taxes on both wages and consumer sales. Good luck!