Back in the day, it used to be that you'd have a baby and leave whatever job you formerly held to raise that child -- at least for the most part. But these days, a growing number of mothers are returning to the workforce after having kids. In fact, almost two-thirds of U.S. moms currently work, according to the Center for American Progress. That's a huge jump from 1970, when only about 25% could say the same.

Still, just because more and more women are returning to work after having children doesn't mean it's the right move for you. Here are a few factors to take under consideration if you're trying to figure out whether it pays to resume the daily grind or take a break. 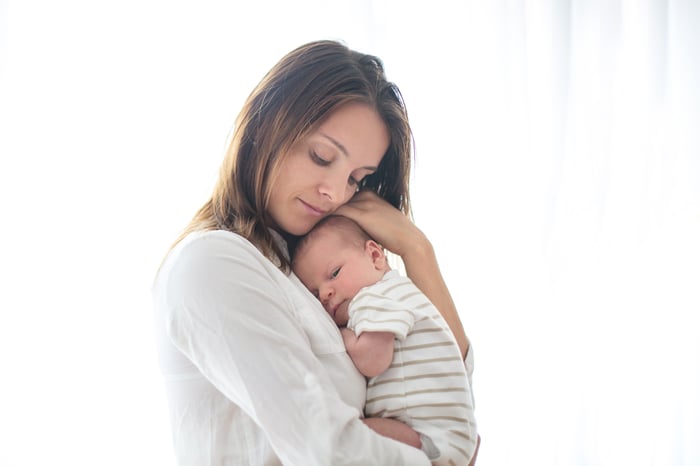 1. The cost of child care

On the other hand, if your situation is more flexible, you might think about how much you'll actually end up bringing home once you factor in child care costs, and whether that amount of money is worth working a full-time schedule. The average cost of full-time day care in America is estimated at $196 per week, or $10,192 a year. A nanny, meanwhile, will set you back an average of $556 per week, or $28,900 for an entire year. (And while some might argue that a nanny is a luxury, don't forget that day care often isn't safe or suitable for babies with health issues or other special needs.)

Now let's say you're earning $40,000 a year, which, after taxes, puts $30,000 a year, or $2,500 a month, in your pocket. Commuting costs the average worker $2,600 a year, so let's subtract that figure to start with. Once we then subtract the average cost of day care, all told, you'd be looking at just over $1,400 a month for what could conceivably be a 40-hour workweek, assuming you don't sign up for commuter benefits and a healthcare FSA to lose less money to taxes.

Is $1,400 a month worth working full-time? Maybe it is, and maybe it's not. That's up to you to decide, but don't get stuck on the figure you used to bring home before having a baby, because child care will wipe much of it out. Incidentally, in our example, you'd actually risk losing money if you were to replace the cost of day care with a nanny -- something to think about.

If, after crunching the numbers on your take-home pay, you see that there's not much left, you may be tempted to pull the plug on your job rather than go back and work for peanuts. But before you do, think about the benefits you might be giving up -- namely, health insurance.

If your family gets insurance through your job, and you don't return to it, you could find yourself on the hook for thousands of dollars in premium costs per year once you're forced to buy a plan on the open market. Even if you're able to get by without your salary (or what's left over of it after child care), don't discount the value of employer-subsidized health insurance, and how paying for healthcare yourself might impact your finances.

Though the decision to return to work after having a child is very much a financial one, it's also an emotional one -- so don't forget that. When weighing your options, think about what you actually want. If you love your job and don't wish to have a gap on your resume, then it might pay to go back to work, even if you're not actually bringing home all that much money between child care and commuting costs. On the other hand, if you're not comfortable being away from your child for hours at a time, or want the experience of raising a baby full-time, then it might pay to forgo certain luxuries and give up whatever income you would've otherwise earned.

Of course, this does assume that you're in a position where you're not completely reliant on your salary to pay your basic bills. It's never a good idea to go into debt, so if giving up your salary means doing just that, you might push yourself to work even if it's not what you want. But if your finances are flexible, and staying home for a while means not going on vacation, cutting cable, or even missing out on a few years of savings, those sacrifices (yes, even that last one, believe it or not) just might be worth it.

The decision whether to go back to work after having a baby is a tough one, but one final thing to keep in mind is that it doesn't have to be an all-or-nothing conclusion. If your employer is willing to be flexible, you might arrive at a part-time or telecommuting arrangement that reduces your child care and commuting costs while giving you more time with your child. In other words, play your cards right, and you just might get the best of both worlds.