We all know that you can't judge a book by its cover and that you're not supposed to count your chickens before they hatch. In the case of the book, the lesson is that something's outside does not always reflect what will be on the inside, while with the chickens, well, eggs are fragile things that don't always make it to hatching.

There's truth in both of these sayings, but others that get bandied about in the workplace are either not true or aren't meant to be interpreted literally. The three sayings below are cliches -- ideas or sayings that have been said so often that using them shows a lack of original thought. Furthermore, each one sounds right when you hear it, but none of the three is actually true.

Of course, that's not to say they are useless. There's a lesson to be learned from each of these cliches, but each requires interpretation and subtlety. 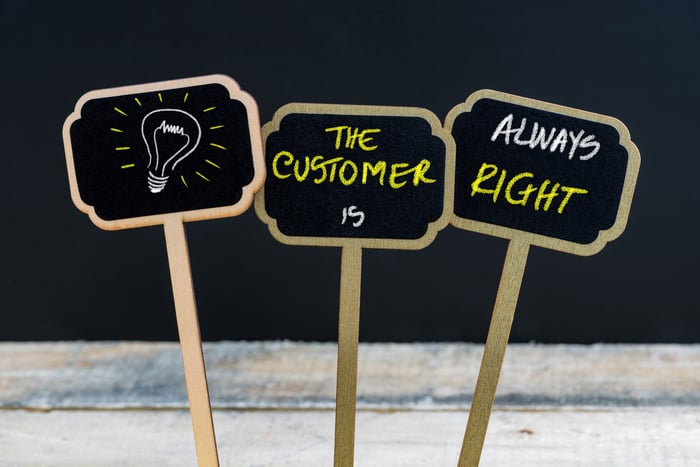 There can be value in a saying even when it's not true. Image source: Getty Images.

1. The customer is always right

When you run a retail store, this one gets thrown at you constantly. The problem is that customers want the saying to be literal and it's easy to see how that might go wrong.

The customer, for example, may want to pay $40 for a $600 item. In that case, the customer is not right, and acting like he or she were would quickly result in serious problems.

Instead of literally treating the customer like he or she is actually right, this phrase is more about being respectful and finding solutions. That's a lesson which goes well beyond retail.

For example, instead of arguing with the customer hoping for a $560 discount on the item above, it's the responsibility of the retailer to explain the situation and offer options. That won't always result in a happy customer (since he or she may want the phrase applied literally) but by showing respect and understanding you can create loyalty even when having to tell people they won't be getting what they want.

2. There's no such thing as a bad question

There are lots of bad questions. For example, it's not a great idea to stand up and ask your boss, "How did you get so ugly?"

In some cases, a patient and understanding employer would answer that one, explaining his or her genetics and showing pictures of family members. Most of the time, however, the person being asked that would at worst be angry, and in many situations fire the person doing the asking.

What this saying is supposed to convey is that you shouldn't be afraid of not knowing something, and that the person being asked should be understanding of the other person's ignorance. If, for example, you're at work and your boss keeps using an acronym you don't understand, it's best to ask what it means. In theory, the boss should explain without judgment.

Any question designed to give the person asking needed knowledge is not a bad question. That's not the same thing as saying that there are no bad questions, since very clearly there are.

3. There's no such thing as bad publicity

There may have been a time, before the internet, where there was no difference between fame and infamy. Even in the current era, we have celebrities who gained their initial renown in ways that were not due to any sort of admirable talent. But that does not mean that getting your name in the news through any means necessary is always a good thing.

This saying comes from the idea that it doesn't matter whether people are talking about you for good reasons or bad ones. Recent events with famous people including Kevin Spacey, Harvey Weinstein, and even Senator Al Franken show that simply being in the news is not a positive. You may increase your name recognition, but that's not valuable if it's for the wrong reason.

This applies in the business world too. If your boss knows you because you're the guy who always comes in drunk, well, that's not the right kind of publicity.

See the truth beyond the cliche

There's value in all three of these sayings when you don't apply them literally. Take any cliche thrown at you and examine it beyond the words on the surface. Respect and support your customers, ask questions without fear, and try to get your name to be known. Just realize that there are degrees and nuances that cliched phrases don't protect you from, no matter how often they get repeated.