It's a scenario many of us have been in before. You show up to work and your boss tells you he wants a certain report completed by the end of the day. Moments later, your other boss walks by and insists that you whip up a presentation within the same time frame. As you then spend the next bunch of hours scrambling to make everyone happy, a third manager comes over and asks you to pop into a last-minute meeting where your input is needed.

There's no question about it: Having multiple bosses can be an absolute nightmare, especially if they each seem to have their own individual priorities. Here's how to handle the situation if you're stuck having to answer to more than one manager. 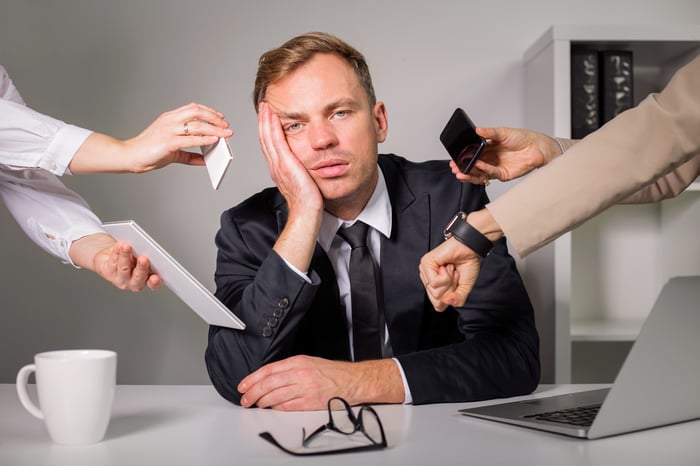 1. Get your bosses on the same page

It'd be one thing if your bosses all understood each other's challenges and were working toward the same goals. But it's often the case that when you're dealing with multiple managers, each will inevitably have his own needs that he wants addressed first. The solution? Call a meeting, sit your bosses down, and figure out a way to divvy up your time fairly so that your managers get what they want, and you're not stuck working until midnight on a regular basis. Sometimes, all it takes is reminding your managers that the others exist for each one to slightly back off.

2. Be clear about deadlines

When you're dealing with multiple personalities and priorities, it can be difficult to determine which assignments to do first. So rather than risk choosing poorly and winding up with a problem on your hands, let your various bosses duke it out. Each week, send a group email to your managers letting them know what's on your plate. Then, get them to agree, in writing, which tasks should be tackled first. Similarly, if you're in the midst of a task for one manager and another walks over and demands that you stop and pitch in on something else, take a deep breath, explain that you're up against an existing deadline, and compose a quick email to both managers reviewing the situation and asking for a consensus.

If, despite your best efforts, you're unable to get your managers to work well together in the context of your time, you may have no choice but to sit down with an HR rep and seek advice on your ongoing struggle. Explain that you're constantly being pulled in different directions, and that you need intervention before things get worse. Asking for help won't make you look like a tattletale; rather, you'll come off as a responsible employee who would rather focus on work than deal with office politics.

Remember, in some ways, having more than one boss can work to your advantage. For example, if your managers stem from different areas of your company, you'll get to dabble in a variety of tasks rather than get stuck on the same old projects time and time again. This not only makes for a more engaging experience on the job but also allows you to broaden your horizons, grow your skills, and become a more valuable employee on a whole.

But that one silver lining aside, reporting to multiple people can spell trouble if you don't know how to handle the situation. Follow these tips, and with any luck, you'll manage to please your various bosses while retaining some sanity in the process.