Sometimes you apply for a job and never hear a word. You may be well qualified, but the company doing the hiring doesn't even send you an email telling you that they went with someone else.

There are times when that has nothing to do with you. Maybe the job was filled internally, or perhaps a few resumes just as good as yours came through before you applied. It's also possible the job was cancelled, or that an expected opening never came to be.

On some occasions, though, it's your fault your resume gets passed on. There are countless reasons for that, but these are four I've actually seen on resumes from people hoping I would hire them. Some of these people did get interviews (and one even got hired), but in most cases doing these things will hurt, if not kill, your candidacy. 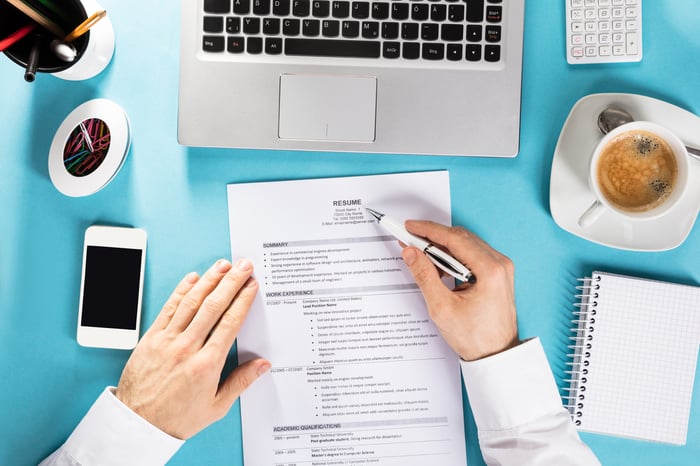 Don't let your resume be the reason you don't get an interview. Image source: Getty Images.

Don't include a celebrity quote

Yoda may well have said the perfect thing that sums up why you're perfect for the job, but probably not. When I received a resume from a reporter candidate where a quote from Oprah Winfrey was given the top 20% of the page, I did read the quote out loud to the office, but I did not bring the person in for an interview.

Your resume is supposed to tell the person doing the hiring about you. A quote from a famous person or character does that but not in the right way. Perhaps if I had been a big Oprah fan, my attitude would have been different, but probably not.

Don't include a competing objective

I'm not a big fan of including objectives at all, but certainly don't include one that shows your goal is success in another field entirely. On many occasions when I was a newspaper editor hiring reporters, I would see objectives like "novelist" or "poet." Those are both admirable goals, but they suggest that the actual job being offered isn't a passion.

That's bad news when you're seeking a difficult, low-paying job like reporter where passion and a desire to work in the field are basically requirements for success. It may be less damning in other fields, but it's probably best to not tell a recruiter your desires are anything other than the job being offered.

If you took five years off to walk around Europe or spent time raising kids, address it on your resume. Any recruiter will notice a gap and wonder what you were doing during those years.

Making someone guess when the actual answer is benign doesn't make sense. Of course, if the actual reason isn't quite so benign, you may want to finesse your answer -- but if the reason for an employment gap will make sense to the typical interviewer, be upfront about it.

A resume is not the place to show your clever design skills. Avoid hard-to-read fonts and use a common layout. It's great that you're an excellent graphic designer with a clever eye, but there are ways to show that outside of making your resume an art project.

Get the basics right too

Of course, it goes without saying that before you even worry about these exotic mistakes, you need to get the basics right. That means making sure your resume has been proofread and copy edited. You should also make sure your dates are correct and that everything lines up correctly.

The person sitting in the hiring chair may well get dozens of resumes that are all similar. It takes very little for someone to be placed into the pass pile, and your job is to do everything possible to avoid that.