Please ensure Javascript is enabled for purposes of website accessibility
Log In Help Join The Motley Fool
Free Article Join Over 1 Million Premium Members And Get More In-Depth Stock Guidance and Research
By Maurie Backman - Jan 28, 2018 at 6:51AM

Got laid off? Read this before you accept a severance payment.

Though getting laid off is never fun, there may be a silver lining to the whole ordeal: a severance offer. Though not every company will go this route, if you're lucky (lucky being a relative term in the grand scheme of losing your job), your employer will offer you some sum of money upon your dismissal. But before you celebrate that windfall and start counting your cash, you should know that severance payments often have several forms of strings attached. Here are just a few points you ought to be aware of.

There's a reason companies offer severance to laid-off employees, and it's not just to be generous. Often, in exchange for that sum of money, your company will want something in return -- namely, your promise not to initiate a lawsuit against it or badmouth it in a public forum. Enter the separation agreement. 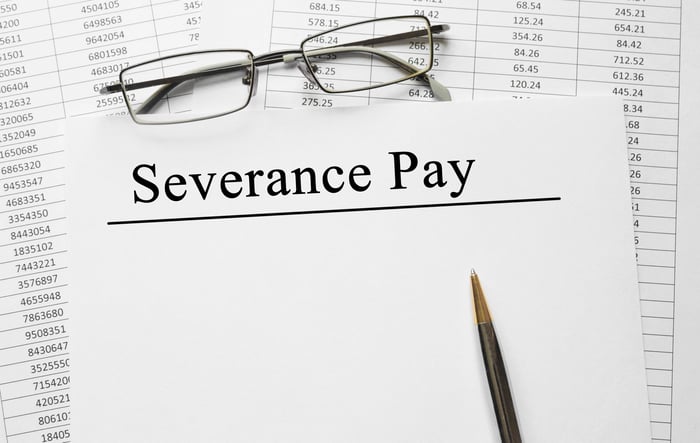 A separation agreement typically goes hand in hand with severance, and it's basically a contract you sign agreeing to the terms your company puts forth in order to collect that payment. Separation agreements can vary significantly from one company to the next, but they all serve the key purpose of protecting employers from backlash. So what happens if you don't sign one? It's simple -- you don't get your severance.

Now this isn't to say that you shouldn't sign your company's agreement and collect your money, especially if it's a notable sum. What you should do, however, is make sure that document is reasonable, and don't hesitate to contact a lawyer if it isn't, or if you're having a hard time understanding its terms. The last thing you want to do is sign away your rights or hinder your career in some way to collect a payout for being terminated.

Provided you worked for a large enough company and held your position for a lengthy enough period of time, getting laid off generally means becoming eligible for unemployment benefits. These benefits are paid through the state you worked in, and though they might represent just a fraction of your former income, particularly if you were a higher earner, you'll want to get at that money nonetheless.

Unfortunately, some states prohibit you from receiving unemployment while you're collecting severance. Now severance payments are usually dished out in a lump sum, but they're meant to cover a certain period of wages. For example, your severance will typically come in the form of, say, one month's pay, as opposed to an arbitrary number. What your state unemployment agency might then do is require you to submit documentation of your severance agreement, and then withhold benefits for the period that severance is meant to cover (in our example, one month of work). This doesn't mean that you shouldn't accept that severance payment -- but know that it might affect or delay your unemployment benefits.

3. You have the option to ask for more

Just as the salary you're presented with in a job offer is really only a starting point, so too is your severance arrangement open to discussion. If you don't think the number your company is offering is fair, or you think you can get more money out of the deal, then it pays to negotiate. This especially holds true if your separation agreement is restrictive in nature, and you know your company is eager to have you sign it.

Negotiating a severance offer is something you can do solo or through a lawyer, if you choose to retain one. Keep in mind that the more reasonable your request, the more likely your company is to comply. For example, if you're presented with a month of severance pay and you come back demanding six months' worth of pay, your company might tell you to take a hike. But if you ask for two months of pay, your employer might meet you in the middle or agree outright if that's what it takes to part ways amicably and get you to sign that agreement.

Though severance payment can help soften the blow in the face of a layoff, don't be fooled into thinking that money doesn't come with consequences and strings attached. Before you accept that cash, know what you're getting into so you don't come to regret it later on.