It's often the case that strong, responsible workers wind up getting laid off due to circumstances outside their control. But what happens when you're not downsized out of a position but, rather, are let go as a result of your poor performance? It's called getting fired for cause, and it can certainly serve as a black mark on your employment record -- if you let it. Here's how to recover as quickly as possible.

Getting fired can constitute a pretty harsh blow, so it's natural to want to take some time to wallow in your disappointment. But don't spend too much time harping on your dismissal, because the longer it takes you to bounce back, the longer you'll be forced to go without an income. Rather, give yourself a target date for kicking off a job search, and get ready to jump back in. This means updating your resume, reaching out to your contacts, and gearing up to go on interviews. 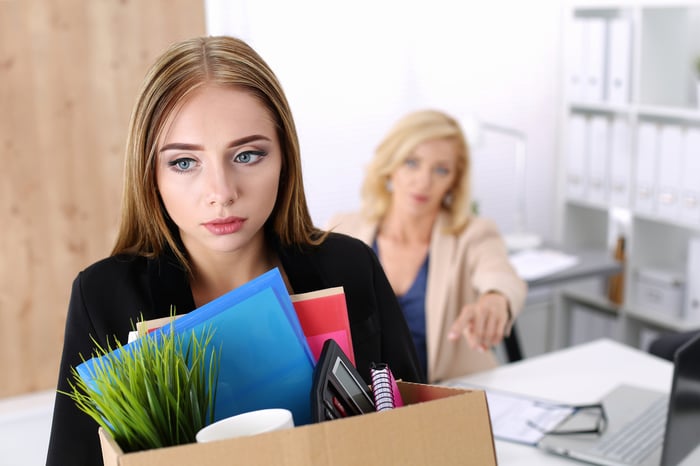 2. Send a kind note to your former manager

It might seem counterintuitive or downright unproductive to get in touch with the person who recently let you go. But there's a benefit to sending your old boss a nicely worded note a day or so after you've been fired, and it's to salvage a degree of professionalism in a situation where you otherwise come away not looking great.

Your note should be succinct, and it should basically go something along the lines of, "I'm sorry things didn't work out and that I was unable to meet expectations, but I appreciate the opportunity to have worked for you nonetheless." By doing this, you're taking responsibility for your shortcomings, and, at the same time, giving your manager a reason to perhaps consider being a bit more kind when prospective employers call during their reference checks. Keep in mind that even if you don't list your old boss as a reference, a potential employer might reach out anyway, so it pays to attempt to get on your manager's good side after the fact.

3. Prepare to be honest during the interview process

If there's one question you're pretty much guaranteed to get asked during any interview you go on, it's "Why did you leave your last job?" And unfortunately, the answer you're now looking at is something along the lines of "because my company made me." So here's how to handle that inevitable but crucial inquiry.

First, don't lie. If you say you were let go due to reasons outside your control but your prospective employer checks up and learns you were fired, you'll ruin your chances of getting the job. A better approach? Be forthcoming about why you were let go, take responsibility for the actions that led to your dismissal, and show how you've learned from them and are prepared to do better the next time around.

That said, don't get into too many details about your dismissal, either. You can start by saying something like, "Unfortunately, my performance wasn't up to par" and follow up with a more thorough explanation only if pressed. Furthermore, don't make excuses for the behavior that led to your termination. Owning up to your mistakes will make you appear far more professional.

Though getting fired clearly isn't great for your career, it also doesn't have to be its death knell. The key is to learn from your mistakes and move forward despite them. With any luck, you'll grow to be a much more diligent worker so that the next time you leave a job, it'll be on your own terms.