Here's a better way to conduct meetings -- and keep your attendees happy in the process.

Like it or not, meetings are pretty much a given in any sort of corporate environment. And from an organizer perspective, it's on you to make those gatherings as productive as possible. With that in mind, here are a few tips for running meetings more efficiently -- and reducing your attendees' associated gripes about them.

It's natural for folks who are called to a meeting to want to know what they're getting into. That's why it's helpful to send out an agenda prior to each meeting you conduct. This way, your attendees will know what to expect and will also be in a better position to determine whether they should accept your invite or respectfully decline. 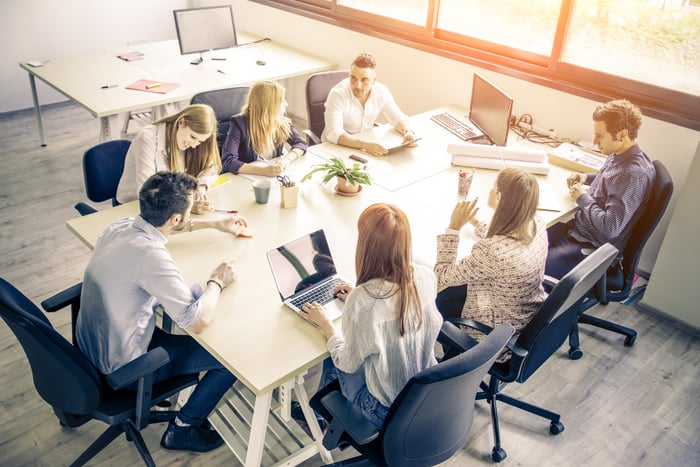 From an organizer perspective, having an agenda to work off can help you better structure your meetings and stay focused on the spot. For example, if you don't map out an agenda, you might allow yourself to get stuck on a certain point that takes time away from other topics in need of discussion. But if you see that you're nearing the halfway point of a meeting and are only on the second agenda item out of five, it'll serve as a reminder to pick up the pace.

2. Make sure the right people can attend

It's often much more efficient to discuss projects as a group rather than communicate with those involved individually. But if you're gathering to review, say, an upcoming presentation, and your in-office graphics guru is out on vacation, that discussion might end up being mostly useless.

A better bet? Before scheduling meetings, figure out who the key players are and work around their schedules. Otherwise, there's a good chance you'll wind up wasting everyone's time, including your own.

3. Don't invite half the office

Though it's a good thing in theory to keep everyone involved with a given project in the loop at all times, there comes a point when having too many bodies in a room is not only needless, but counterproductive. In fact, the more people you invite to a single meeting, the more likely you are to see your share of interruptions, side conversations, and unsolicited opinions.

Rather than invite the whole world to each meeting you organize, figure out who really needs to be in that room and include just those people. You can always send out a recap email summarizing your discussion afterward so that those playing a lesser role can remain informed without attending that same conference table.

4. Get your timing right

Though some employees don't mind attending meetings, many inevitably dread them. Don't make them even more loathsome by scheduling them at the worst times during the day, such as first thing in the morning, during lunch, or at 5:00 p.m. -- if that's the time when most of the folks in your office aim to leave. Rather, be mindful of people's schedules and aim for non-offensive times, such as mid-morning or mid-afternoon.

Another good bet? Schedule your meetings immediately after lunch. This way, your attendees will come in refreshed after taking a break.

Though workplace meetings are generally unavoidable, you can take steps to make yours less painful and more productive. And that's something you and your participants will no doubt come to appreciate.