Please ensure Javascript is enabled for purposes of website accessibility
Log In Help Join The Motley Fool
Free Article Join Over 1 Million Premium Members And Get More In-Depth Stock Guidance and Research
By Maurie Backman - Updated Mar 8, 2018 at 9:47AM

Hint: None of them involve slacking off.

So you handed in your resignation letter stating you'll be leaving your employer in two weeks' time. Hopefully that means you're on to bigger and better opportunities, but don't get too caught up in that excitement just yet. Your last two weeks on the job could spell the difference between leaving on a positive note and tarnishing your reputation on your way out of the door. Clearly you're much better off aiming for the former, so here's how to make sure you leave with a good impression.

1. Map out your processes

We all have tasks we're responsible for at work, and chances are, you have your own specific method for tackling yours. To make the transition easier on your manager, colleagues, and eventual replacement, do everyone a favor and write up a detailed report summarizing your various processes. This is something those involved will be sure to appreciate, and it'll help you leave on a high note -- which is important should you ever need a professional reference or decide that you want your old job back. 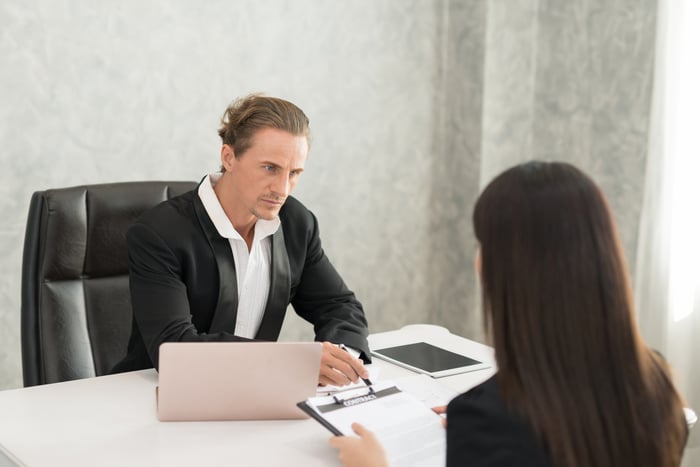 But it's not all altruistic. Mapping out your processes before you leave will help you avoid frantic phone calls from old coworkers once you've left your job behind. And the last thing you want is to have to take the time to deal with those requests when you're trying to get up to speed at a new company.

When it comes to advancing your career, there are few things as essential as networking. That's why it's wise to exchange personal contact details with your various associates before leaving your job. You never know when you might need to ask someone for a favor, so having a way to reach those folks on a non-work phone number or email address is crucial.

3. Gather copies of your best work

Provided it's not against company policy to do so, be sure to gather samples of your best work if such materials won't be easily accessible once you leave the firm. For example, if you're a software developer who designed an internal database, and you're not breaking any rules by taking a few screen shots of your sleek layout and easy sorting system, do so. This way, you'll have material to add to your professional portfolio, which could come in handy down the line.

Once you've given your notice, you may be inclined to slack off a little during those last couple of weeks on the job. After all, it's not like you have anything to gain by working harder, right? Wrong. Making an effort when you're clearly on your way out will show your manager and colleagues that you're an upstanding worker, and that, in turn, could boost your reputation. And, as stated repeatedly above, you never know when you'll need to call in a favor, in which case earning that additional respect could go a long way.

5. Prepare for your new role

It's hard to put time into your new role when things haven't yet wrapped up at your current job. It might take some juggling, but you should try your best to use that transition period as an opportunity to do some preliminary research to get up to speed on your new position. You might even proactively reach out to your soon-to-be manager and ask for some homework so that you come in prepared. Going this route will help you start your new role on a positive note, and it might help you avoid some of the stress that comes with learning the ropes.

If your goal is to build a solid career, then it pays to be strategic during that two-week notice period. Your behavior and performance during that transition could wind up making a huge difference at some point in time or another.