If you've never had to fire someone before, consider yourself lucky. Letting an employee go is one of the toughest things you'll ever have to do as a manager, but sometimes, these situations become unavoidable. If your company is downsizing, or you have an employee whose work isn't up to snuff, then you'll need to step up and have that difficult but necessary conversation. Here's how to approach it.

Learning that you're being let go, whether due to your own poor performance or circumstances outside your control, is never easy, so when you break the news to your employee, aim to be as sympathetic as possible. At that same time, be firm in your language so that there's no confusion as to whether the matter is up for debate. 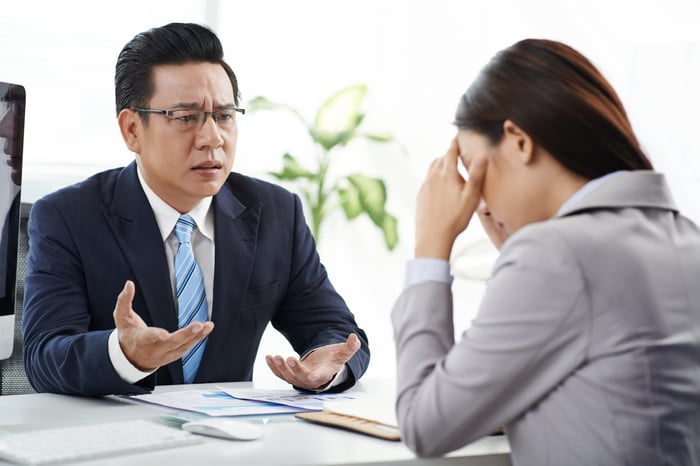 Keep in mind that your employee might beg you to reconsider, but if the matter is out of your hands (such as in the case of downsizing), simply state that there's nothing you can do. If your employee is being let go due to something he did (or didn't do, such as work hard enough) but you've already made your decision, stick with it.

2. Expect a strong reaction -- and maybe some tears

Most workers won't take kindly to the news that they're out of a job, so be prepared for some serious backlash. You might have an employee who responds with strong, or even foul, language, or another who breaks down and cries in your office -- so know how to deal with both ends of the spectrum. If an employee is angry, but not at you personally (such as in the case of a companywide layoff), you might allow him some leeway in venting. But if you start to feel personally attacked, you may want to call in HR before things escalate.

As far as your criers go, give them some time to catch their breath, and do your best to offer encouraging words. If you're dealing with a layoff situation, you might offer to serve as a professional reference for the person being let go, provided this doesn't violate your company's policy. Will that make things totally better? No. But it might help soften the blow.

3. Have reasonable expectations if your employee isn't leaving right away

Though people who are fired are typically asked to pack up their desks and leave on the spot, those who get laid off due to no fault of their own are often given anywhere from a few days to a few weeks of notice. If you're dealing with the latter scenario, don't expect that employee to do the best of jobs during his or her final days at your company -- and don't give them a hard time for it, either. In fact, you'd be wise to map out a list of tasks you'd like that employee to complete during their final days or weeks on the job and present that during your discussion. This way, they understand what's expected of them.

At the same time, you'll need to prepare for the possibility that that employee won't want to work another few days or weeks, but rather, will ask to leave on the spot. If it's a less essential worker, you may want to agree without an argument. If that's not the case, then you'll need to be prepared with ways to motivate them to stay on and wrap things up. Allowing that person to work from home, for example, might do the trick.

Another thing: If you're going to lay off an employee but ask that they stay on a bit longer, either have that conversation at the very end of the workday or allow that employee to go home for the day immediately after your chat. To expect that person to march back over to their desk and keep plugging away is downright unreasonable -- and, frankly, a little heartless.

Though it's better to be the one doing the firing as opposed to getting fired, dealing with that situation from a manager perspective is difficult nonetheless. Follow these tips, and with any luck, the hard conversation you're about to have will go as smoothly as it possibly can.