Please ensure Javascript is enabled for purposes of website accessibility
Log In Help Join The Motley Fool
Free Article Join Over 1 Million Premium Members And Get More In-Depth Stock Guidance and Research
By Maurie Backman - Mar 28, 2018 at 9:36AM

It's just a really bad idea.

As a manager, you're probably aware that there are two types of criticism you might encounter in the workplace: the constructive type, and the spirit-bashing, nit-picky, just-for-the-heck-of it type. Hopefully, you're more apt to provide the former to your team members than the latter. But even so, there's a time and a place for constructive criticism, and a public forum just isn't it. Here's what'll likely happen if you critique an employee in front of his peers.

1. You'll alienate the employee you call out -- and possibly the rest of your team

Nobody wants an overly critical manager, and if you call out your employees in public, that's how you'll come off. The fact that you can't hold back on commenting instantly sends the message that you're hard to please and have no interest in being diplomatic -- and those are traits that could easily turn off not just the person getting that feedback, but your entire team. 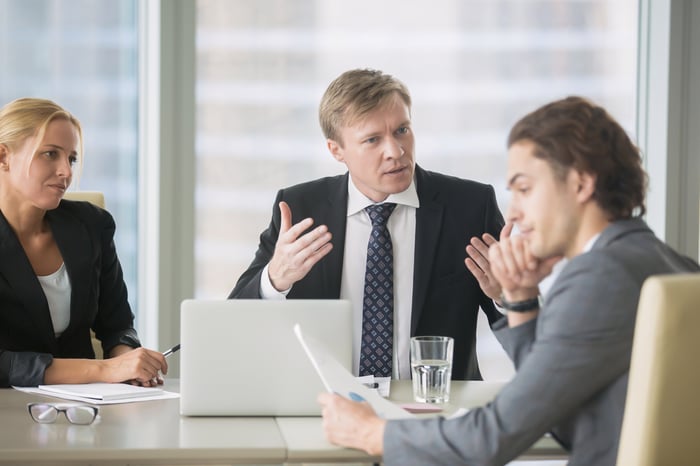 Imagine you have a direct report who's making a presentation to your entire team. He's worked hard on those slides and is putting himself out there, yet midway through, you interject with a comment that's supposed to be helpful, but counts as criticism nonetheless. How do you think that person will react? Is he likely to embrace that feedback, or curse silently in his head and hope the redness on his face isn't too obvious? When you criticize people in public, you risk not getting through to them for the sheer reason that they're too embarrassed to process the information you're sharing. And that defeats the purpose of said criticism.

3. You'll come off harsher than you probably mean to

Let's face it: Criticism, even when of the constructive variety, has a negative connotation. But there are also different levels of criticism. For example, there's a stark difference between something along the lines of "that presentation could've used a touch more data" and "that presentation stunk." But when you criticize an employee in front of his peers, an otherwise low-grade point of critique might escalate into a crushing blow for the person receiving it. Or, to put it another way, if you criticize your employees in public, they might think you're being tougher and, frankly, meaner, than you need to be. And that won't do anyone any good.

Let's be clear: As a manager, it's your duty to provide criticism when appropriate so that your employees can learn from their shortcomings and grow. Just be sure to provide that criticism in a private setting, whether over email or during a one-on-one meeting. First, you'll eliminate the embarrassment factor so that your employee can actually focus on the words coming out of your mouth. Secondly, that person will be more likely to ask follow-up questions and aim to understand why you're giving the feedback you are -- something a public forum may not allow for.

No matter how you dice it, calling employees out in front of others is rarely a good idea. Just chalk it up to the Golden Rule -- criticize others as you'd like them to criticize you.