Please ensure Javascript is enabled for purposes of website accessibility
Log In Help Join The Motley Fool
Free Article Join Over 1 Million Premium Members And Get More In-Depth Stock Guidance and Research
By Maurie Backman – Apr 5, 2018 at 10:18AM

It's a fine line between complaining and asking for help. Here's how to navigate it.

If you're not content with your current job, you're certainly not alone. It's estimated that 52% of Americans identify as being unhappy at work, and the reasons run the gamut from inadequate compensation to lackluster benefits to stingy time-off policies.

Then there's company culture to consider. If you work in an environment where you don't feel valued or respected, you're highly unlikely to wind up satisfied. 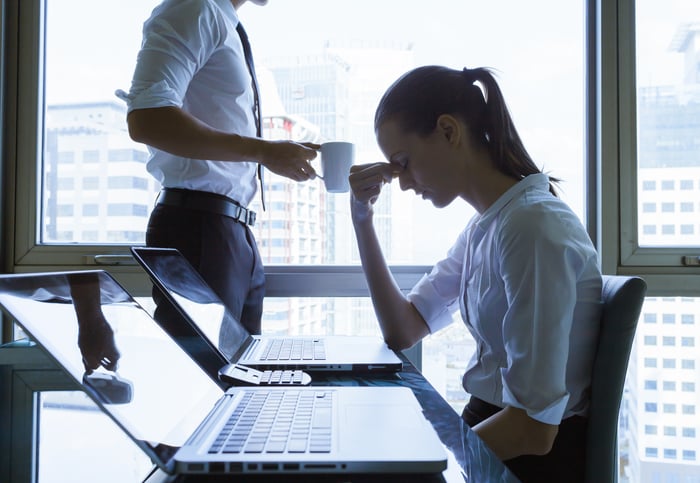 And let's not forget the nuances of your specific role that could be at play. If you find that you're constantly overloaded with assignments and plagued by impossible deadlines, that alone could set the stage for a whopping dose of frustration. The question is: How do you convey what you're feeling to your boss? On the one hand, you don't want to complain or seem negative. On the other hand, bosses can't address issues they're left in the dark about, so if you don't share, things won't change.

The answer, therefore, is to have that sit-down and air your grievances, albeit strategically. Here's how to approach that conversation.

It's important for your boss to know how you're feeling so that steps can be taken to improve the situation. Therefore, you'll need to share the things that are bothering you. But don't just inundate your boss with a series of gripes. Rather, present things in a professional context.

For example, rather than say "I'm constantly being pulled in a million different directions, and it isn't fair," try "I'm often pulled in multiple directions, so much so that it's difficult for me to focus and remain productive." The latter is something your boss will more likely relate to.

If your boss is the problem, you'll need to choose your words even more carefully. Instead of saying "Your deadlines are unreasonable," go with "I find that I'm frequently forced to rush through projects to meet deadlines, which impacts the quality of my work." This way, you're not hurling accusations, but rather, presenting a problem that your boss has the power to solve.

When you're sitting down with your manager to express your job-related unhappiness, it's natural to focus on the negative. But don't just do that. Rather, offer alternatives that might make the situation more tolerable.

For example, rather than say "The administrative tasks I'm forced to do take up too much of my time," try "I'd love to spend more time developing marketing campaigns, and having more administrative support will allow me to do just that."

Similarly, if you're sick of your boss micromanaging you, don't say "It's hard to get my job done when you're constantly breathing down my neck." Instead, say "I'd like to tackle my next big project solo and check in with you after the fact. Based on my performance to date, I believe I've proven I can be trusted to run with it." In both instances, you're telling your boss what you do want rather than what you don't want.

3. Thank your manager for listening

It's never easy to be on the receiving end of employee complaints, even if they're stated diplomatically and are unquestionably valid. Before you wrap up that conversation, be sure to thank your boss for taking the time to hear you out. This will leave a good taste in your manager's mouth, which will increase your chances of having your concerns addressed.

If you're miserable on the job, there's no need to suffer in silence. At the same time, don't just unload on your boss because that may not end up doing you any good. Rather, approach the conversation professionally. If you do, there's a good chance things will slowly but surely improve.