Please ensure Javascript is enabled for purposes of website accessibility
Log In Help Join The Motley Fool
Free Article Join Over 1 Million Premium Members And Get More In-Depth Stock Guidance and Research
By Maurie Backman – Updated Apr 10, 2018 at 11:31AM

We're often encouraged to tackle multiple items at once in an effort to get more done. But new data suggests that this approach is actually hurting us.

We're told there are certain soft skills employers tend to look for in potential hires, like solid communication, organization, and time management. But if there's one such ability that companies really tend to put a lot of stock in, it's the capacity to multitask.

Whether it means typing emails while participating in meetings or answering calls while compiling data, multitasking has practically become a necessity in today's fast-paced, nonstop working world. But are we really serving ourselves well by attempting to tackle multiple items at once, as opposed to giving single tasks our full attention? New research says maybe not. 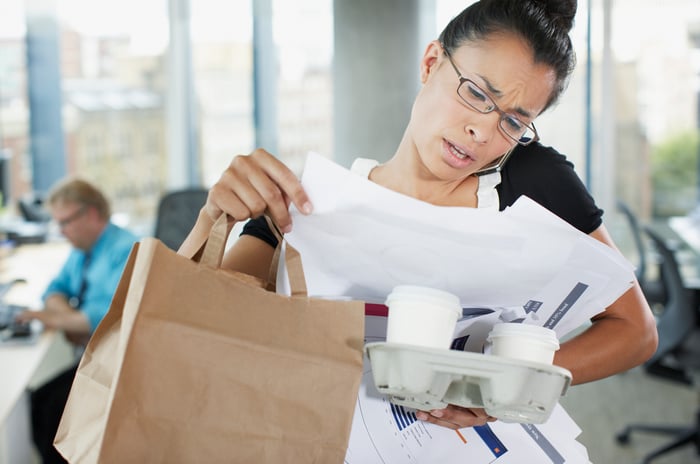 One study from Finland found that multitasking interferes with certain types of brain activity, making it more difficult for workers to process and absorb information. Another study out of Stanford University found that multitasking is actually less productive than doing a single task at once. Furthermore, those who are frequently expected to multitask, and are therefore inundated with loads of information simultaneously, tend to have trouble paying attention, remembering details, or switching from one task to another.

All of this tells us one thing: It's time to rethink that classic yet damaging approach to tackling job-related demands because, clearly, it's not doing us much good.

A better approach to your workload

Why do we multitask? It's simple: to get more things done more quickly. But since research shows that we actually thwart our efforts and diminish our productivity by multitasking, it pays to stop juggling and commit to taking the one-thing-at-a-time approach instead.

Getting buy-in from our managers, of course, is another story, so it pays to run your own personal experiment. Stop multitasking for a week and see what it does for your output. If you find that you're churning out projects more rapidly, and doing a better job on them at that, then that's reason enough to explain to your boss that you'll be ignoring your emails and phone for lengthy stretches going forward to improve your performance.

Of course, getting into the habit of not multitasking is easier said than done, but a good way to begin is to map out a schedule at the start of each day so you know what to work on when. For example, if you currently spend about an hour per day answering emails, carve out three separate 20-minute windows to reply to messages so you don't feel compelled to respond while you're in the middle of other things. Similarly, if you're looking at a day with several meetings, plan around them so you can better focus during those discussions. Doing so might allow you to accomplish more with your fellow participants, thus eliminating the need for future meetings that eat up valuable work time.

Finally, put yourself in a physical environment that's conducive to focusing on individual tasks. In other words, turn off your phone's ringer while plugging away at your desk, or lock yourself in a conference room when writing reports so you're not forced to answer questions from colleagues who tend to pop over and ask for help. Often, we wind up multitasking not because we plan to, but because we're forced to, so take that possibility off the table to the extent that you can.

Although we've been trained to laud multitasking as a positive trait, it's time to reconsider whether the ability to juggle is something we ought to encourage. In a world where information overload is more the norm than the exception, it certainly wouldn't hurt to try taking a step back and approaching our jobs with a bit more focus.