Please ensure Javascript is enabled for purposes of website accessibility
Log In Help Join The Motley Fool
Free Article Join Over 1 Million Premium Members And Get More In-Depth Stock Guidance and Research
By Daniel B. Kline - Apr 18, 2018 at 8:01PM

It takes more than responding to help wanted ads.

Before the internet, newspapers had large classifieds sections filled with job ads across most industries. And a number of professions trade magazines contained hefty help-wanted sections full of targeted openings.

That was necessary, because before email, social media, and the internet, your personal network consisted of people you actually knew. That has changed as technology has made it easier to keep in touch with casual connections.

You no longer have to make a phone call or send something by mail to that person you met at a conference or industry event. In addition, it's easy to keep in touch with past co-workers, casual acquaintances, and really anyone else through social media.

That has changed the nature of searching for a job. Because it's not just job seekers who have big networks. The people doing the hiring know a lot of people, too, and if you're not one of them, you may be left out. 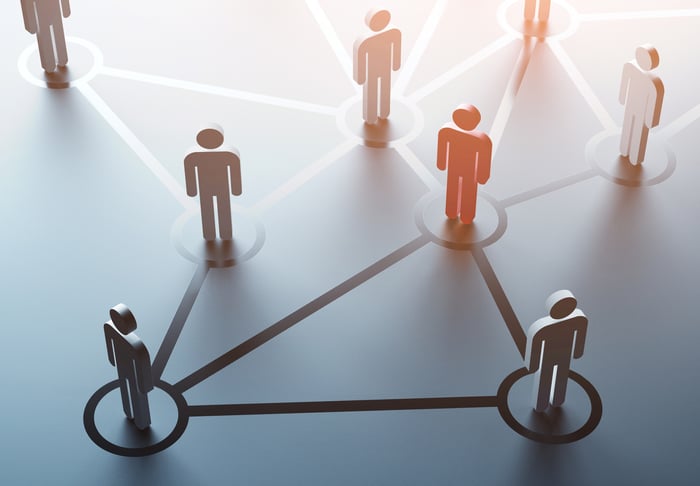 It's who you know

Estimates vary as to what percentage of jobs are filled before being advertised, but it's likely well above 50%. A recent LinkedIn article estimated that the number could be as high as 85%.

No matter the number, it's very clear that your chances of getting hired go up if you have a vast network. Even when a job is posted publicly, if you know the person doing the hiring (or someone who can put in a word for you), you may get pushed to the head of the line.

How do I network?

Networking sounds scary, but it's really just doing two things: meeting people and maintaining the contact. For some people, the first part is easy. If you're social, then every interaction with someone in your field can increase your network.

If you're more reserved, however, then it can be a bit harder. But there are ways to do it. Get involved in industry events. Attend gatherings where connections might be made. Think everything from conventions and trade shows to volunteering opportunities. You don't need to become good friends with everyone you meet. Just go from stranger to acquaintance.

After that, the challenge is keeping the contact warm. Social media can help with that. Whether you connect on LinkedIn, Facebook, or some other platform, it's all about maintaining the connection for when you might need it (or the other person might need you). Yes, you may make some actual friends doing this, but that's a side benefit.

Put your network to use

If you see a job posting and have a connection, it's reasonable to ask the person you know for help. It's generally more useful, however, to quietly let your network know when you might be looking for a new opportunity.

Just knowing a lot of people should help. Most folks like to be the hero, and when a colleague needs someone for an opening, having a name to suggest makes them a hero twice over.

Be reasonable when tapping your network. A casual acquaintance or a work friend won't pull major strings for you, and it's wrong to ask. Most people, however, will gladly talk with you or pass your name on.

Having a big network makes you an insider. It puts you on the list before the general public even knows there's a potential job opening. That will help your career and take some stress out of the process of getting hired.