Please ensure Javascript is enabled for purposes of website accessibility
Log In Help Join The Motley Fool
Free Article Join Over 1 Million Premium Members And Get More In-Depth Stock Guidance and Research
By Daniel B. Kline - May 31, 2018 at 5:01AM

It may not be pleasant, but do it before it's too late.

My grandfather, the founder, CEO, and driving force of our family business, never expected to die young. Unfortunately, after routine surgery for prostate cancer, an infection set in, followed by an allergic reaction to the antibiotics used to treat it, and ultimately he passed away.

That left our family business in a tricky position. A nonrelative took the CEO chair, as was planned, but everything beyond that had never been openly discussed with the entire family present. There was a succession plan, but it was short term and did not consider future generations.

In our case, my grandfather probably knew what he wanted to do. Actually doing it, however, would have led to tough conversations and hurt feelings. It might also have angered each of his four children (two in the business and two not) as well as me, my brother, and my cousin, the only grandchildren. 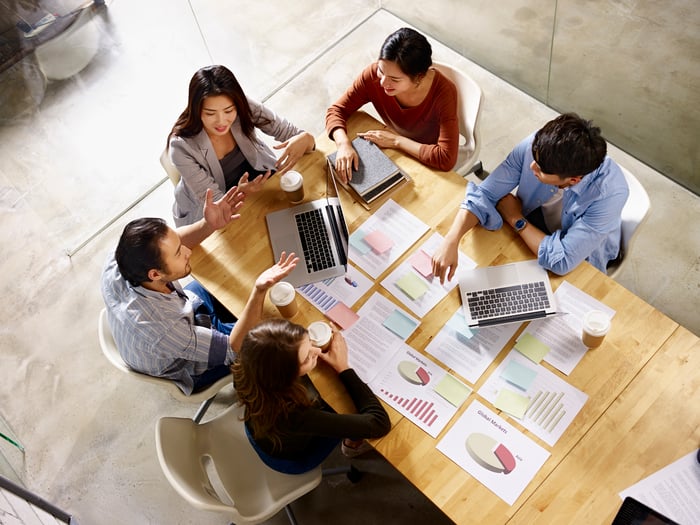 Gather your family and talk about the future of the business. Image source: Getty Images.

Whether you own a mom-and-pop shop or an outfit that employs hundreds, it's important to talk with your family about your wishes and theirs. The size of the business matters, but the components of the discussion are the same whether you are talking about a small shop or a multiple-location business.

1. Explain the situation: Talking about money is not always easy, but it's important for everyone affected to understand the value of the business and your personal financial situation. If, for example, you need to sell the company in order to afford to retire, that's a very different scenario than if you plan to pass the business on to your kids as a gift.

2. Lay out your plans: The owner or owners of the business have a right to decide what happens to it. That said, be considerate of what your family may want. That may include letting younger generations buy in or giving equity to certain family members (maybe ones who have worked there) and not others.

3. Listen to all opinions: Your family may not like what you have planned. Maybe they don't want to take over the company and would prefer that you sell it. You're not obligated to follow anyone else's wishes, but doing something like leaving a business to people who don't want it is a bad idea.

4. Be open and deal with anyone who is upset: In my family, the business was left largely to the two children who worked at the company, with the other two getting smaller shares. That was not met with universal favor, and it has been a source of strife for decades. Hear out anyone who is upset and make an effort to explain your ultimate plan.

These are conversations that need to happen early and often. Your plans may change as financial needs evolve or the family dynamic does. You may want to hire someone to facilitate the discussion, and you definitely need a lawyer to formalize your wishes in a proper estate plan.

You never know when something terrible may happen. In addition, talking about and making a long-range plan may change that plan. You may find that one of your heirs wants to learn the business, or one who works there dreams of doing something else.

No matter what you're afraid of learning or who might be upset, have the talk. Fences can be mended and relationships repaired while you are alive, but if the unexpected happens, there is no way to go back.