In most situations, it makes sense to play it safe. Don't cross the street without looking both ways, and never drive a car without wearing a seat belt. Both of those things make sense because there's no upside to making the dangerous choice.

When it comes to your career, though, sometimes it does make sense to take risks. You shouldn't be (small-f) foolish or take risks just for the sake of it, but there are situations when the safe choice limits your upside.

If you take a risk and fail, you can always get another job. The prospect may seem scary, but if you take enough smart, well-considered risks, then hopefully some will work out for you. 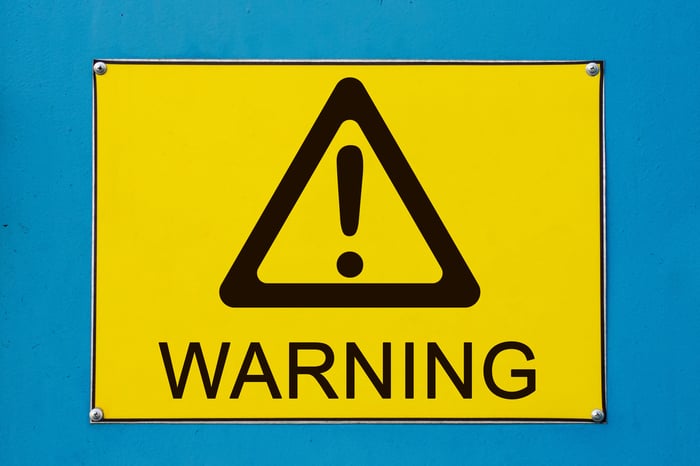 Just because it's a risk does not make something a bad idea. Image source: Getty Images.

When your integrity is on the line

Jason Hall: There are plenty of times when the best thing to do at work is "keep your head down" and focus on the work. Whether it's avoiding office politics (or discussing real politics), gossip, or correcting your boss when it would only cause you to catch their ire, these can be "high-risk, low return" situations that are best avoided. And there are other times it may go either way, if there's real risk you could do permanent damage your reputation if you have a plan or idea that fails.

However, there should be a red line when it comes to your integrity. This is because, in my experience, an employer or coworker who asks you to start letting "little" things slide will eventually expect you to start ignoring -- or possibly even hiding -- bigger things. And sometimes these can mean breaking the law and becoming an accomplice to a crime. Of course, it's important to consider context here, but in general, it should be pretty obvious when you're starting down a dangerous path.

But if you always make a point to be honest in your dealings with your employer, peers, and clients, you can avoid a slippery slope that can ruin careers and lives. The bottom line is, no job is more important than your integrity. If you have to break rules or lie or commit crimes to stay employed, you're risking a lot more by trying to stay with that company.

When you've saved for it

Maurie Backman: I'm the first person to encourage others to pursue their dream careers, because having done so myself, I know how rewarding it can be. I worked at a hedge fund for almost five years after college, all the while wanting to move over to something more creative. When I finally took the leap, I knew it would involve a major pay cut, and I was OK with that. The reason? I had savings to back myself up.

We spend so much time at work that we deserve to be doing things we love. At the same time, we can't neglect our bills. If you know you want to switch careers, or take a similar risk that might result in a drop in income, go for it -- but save some money first. When I went from collecting a steady paycheck to freelancing, I knew it would take time to build up a client base, and so I saved enough to ensure that even if I didn't earn a dime during my first six months of independent work, I'd be OK.

It's brave to take a career risk, but it's unwise to compromise your near-term and long-term financial security in the process. So don't. Save money to buy yourself the option to take that risk. This way, you can approach your new venture head on without having the stress of getting evicted or running up credit card debt holding you back.

When you're stuck in a dead-end position

Daniel B. Kline: A few years ago I was working as the editor of two small -- some would say dying -- local newspapers. My boss was a nice enough guy but we had differing philosophies on local news. I believed in cramming as many local stories in the paper as possible. He believed in spending as little money as he could.

It wasn't a bad job, but it was dead-end. If I stayed I was never going to get a meaningful raise, a promotion (there was nothing to promote me to), and it was unlikely my boss would come around to my thinking as to how we could get back to growth.

I wanted to leave and could have left for better newspaper jobs. That, however, would have likely been trading the headache I knew for a different one. Instead, I joined a friend of mine and started a business.

At the time we started we pooled the income I was making in my early days freelancing for Motley Fool and the money he was making building small-scale websites. It was barely enough to cover rent on a small office and pay each of us fairly meager salaries (less than I had been making).

It took a while but I started bringing in more as a writer and we landed a contract to manage a company's digital portfolio. It was a grinding slow build, but we went from struggling to successful and slowly the imminent danger we had been in through our early days faded.

That risk led to my current career as a full-time, work-from-home writer. Many people I worked with at that newspaper still work there or hold similar jobs elsewhere. Most of them wish they had taken risks and now with time having passed it's harder and scarier for them to do so.

I might have failed and if I had, I would have found a job. Perhaps that position would not have been as good as the one I had left, but ultimately I would have reset myself and gotten back in position to take the next risk.