Having sick employees around the office is bad for business -- not to mention everyone's health.

It's an oft-bemoaned fact that American workers get less paid time off than many of their international counterparts. The average U.S. employee gets just 10 paid days off per year, and often, that allotment includes both vacation and sick time.

The problem with policies that don't distinguish between leisure time and sick time, however, is that workers often will go to great lengths to avoid taking off for the latter. As such, many have a tendency to come to work sick, which pretty much benefits no one. 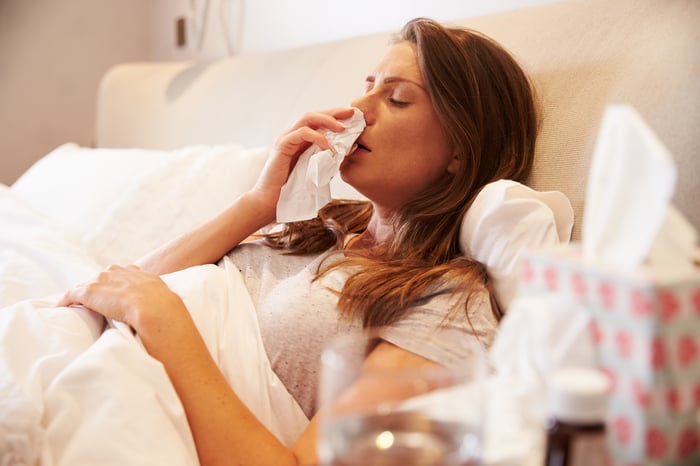 If your company doesn't offer a distinct sick-leave policy -- one that's separate from actual vacation days -- it's time to rethink that system. Here's why.

You might assume that once you implement a sick-day policy, you'll see a drop in overall attendance. After all, once workers are able to take sick time without worrying about losing pay or having it eat into their vacation days, they'll be more inclined to call in sick the moment they feel a sniffle coming on.

But actually, having a sick policy could lead to fewer absences. The reason? People who are actually sick will be less likely to come to work and spread their germs. As such, they won't get the opportunity to infect other workers, who will then have no choice but to miss work themselves.

2. It could improve morale

When workers feel respected, they tend to go the extra mile for their employers. Offering a sick policy sends the message that you care about your employees and their health, and that's something they're apt to show their appreciation for in the form of hard work.

When sick workers are given an opportunity to get better, they tend to come back recharged and ready to work. But if you don't offer paid sick time, and those workers drag themselves into the office when they're not feeling well for days on end, you might lose out on productivity, thereby wasting money.

Think about what makes more sense for the business: having a given employee take a day off to recuperate and then do a stellar job for the three days that follow or having that same worker do a mediocre job for four days straight because he or she hasn't recovered from being ill? Chances are, the former scenario will result in better output.

Clearly, there's a lot to be gained by offering your employees paid sick leave, so do some research to see what constitutes a fair policy. Some companies offer a certain number of sick days, while others offer unlimited sick time, so figure out which system will work best for your business, as well as your employees.

Once you have that system in place, don't hesitate to make it clear that abusing it won't be tolerated. Unfortunately, you may come to find that you have some employees who consistently manage to mysteriously fall ill on Fridays and Mondays during the summer or before and after holiday weekends, and often, there's no way to verify whether they're faking it or not. But chances are, the majority of your workers will be honest about when they do and don't need sick time, and that's reason enough to make it easier for them to take care of their health.