Sometimes work just becomes boring. Maybe you have mastered all of your responsibilities, or perhaps it's a slow time of year when very little is happening.

When that happens, simply getting up in the morning and going to work can be a chore. Days seemingly become longer, and it's hard to remain motivated.

That's a bad situation for both you and your employer. A disengaged worker may still do an OK job, but it's likely that mistakes will be made. To keep that from happening, it makes sense to be proactive. Take at least one of these three steps and your boredom may become a thing of the past. 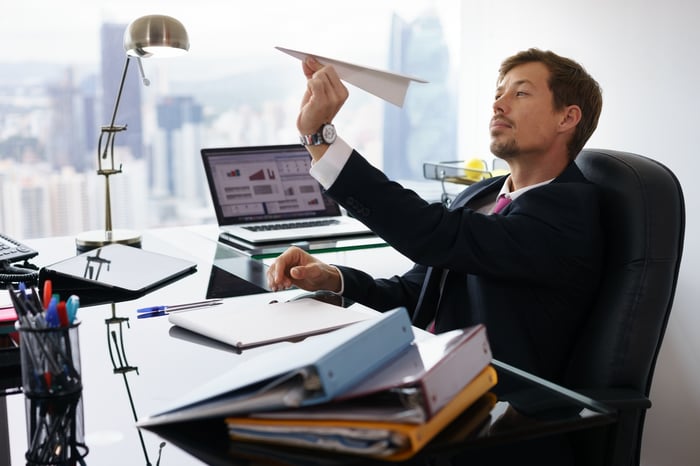 There are ways to deal with boredom at work. Image source: Getty Images.

1. Talk to your boss

A good boss will care if you have become bored. He or she will probably also understand that many positions have different rhythms and/or times of year when things slow down.

Tell your boss why you are bored, and bring your own solution. Maybe you would like to be trained in a new area. Perhaps you want to undertake a project you normally don't have time for.

Don't present your boredom as a negative. Make your situation an opportunity for you and your company.

Back when I was a teenager I worked on Saturdays at my family's business. One of my key tasks was sending out mailings to huge lists of customers. It was tedious, repetitive work. To make the hours pass faster, I used to challenge myself.

How many envelopes could I stuff in an hour? Could I beat that record? It seems silly, but taking something dull and making it a challenge made boring work a lot more exciting.

When I managed a large, independent toy store, February and March were very dull months. Kids were in school, and our business slowed down during the week quite a bit. And it felt even slower because we had just come off the holiday rush.

To keep things exciting (or at least less boring) for my staff, this was the time of year I would move people around and let them try new tasks. Maybe that would just mean working in a new section of the store, or perhaps I would let someone help me do some ordering.

It wasn't an exact science. Instead, the idea was to have more people able to do more things. That way when things got busy again we would be a stronger team overall.

Having a few slow weeks after a rush period is different than when you have fallen into a long-term rut. If you're bored because of a short slow down, it's OK to just enjoy the slight breather.

If it's a longer-term issue or you're bored because you have mastered your job, take an active role in addressing the situation. Work with your boss and find ways to challenge yourself. You don't have to accept boredom. Instead, turn it into an opportunity to improve your situation or prepare yourself for the next time things get exciting.