Please ensure Javascript is enabled for purposes of website accessibility
Free Article Join Over 1 Million Premium Members And Get More In-Depth Stock Guidance and Research
By Maurie Backman - Sep 24, 2018 at 6:18AM

We all want to be more productive at the office. After all, the more efficient we are during the day, the less work we stand to take home with us at night or on weekends. Not only that, but when we boost our productivity, our bosses tend to take notice, and that can open the door to things like raises and promotions.

Now, there are several things you can do at the office to improve your productivity. You can get more organized, eliminate distractions, and start working off of a schedule to ensure that you're meeting goals. But here's one surprising tactic you may not have considered that could prove equally effective: taking a nap in the middle of the day. 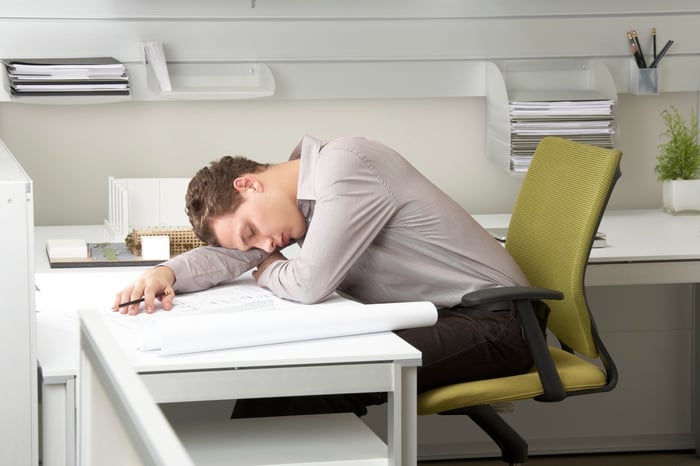 Are you starved for sleep?

It's an unfortunate fact that most Americans don't get enough sleep to not only maximize their performance at work, but function well as humans. Job site Glassdoor reports that 75% of American employees get an average of 6.9 hours of sleep per night, which is below the recommended seven to nine hours we're all supposed to be striving for. Not surprisingly, 66% of workers feel they'd do better at their jobs if they were to get more sleep.

But apparently, that shut-eye doesn't necessarily have to take place within the confines of one's bedroom. In fact, a growing number of companies are allowing workers to nap on the job in an effort to help them do better and feel better. Specifically, the construction, marketing, arts and entertainment, and IT services industries are the most encouraging on the nap front.

Meanwhile, 56% of employees believe that napping leads to an uptick in productivity at work. And it makes sense. After all, research has shown time and time again that napping can lead to better memory, alertness, and concentration. It can even work wonders for the immune system.

Imagine you've made it to the midpoint of the afternoon and find that you're dragging. You then have a choice: keep going until 5 p.m. and get as much done as you can, or put your head down for 20 minutes and wake up feeling energized. In the latter scenario, you might actually accomplish a lot more with your remaining time.

Of course, sneaking in a nap at work is easier said than done when your company doesn't have a break room with a couch. Still, there are ways to do it. If you drive to work, pop over to your car and curl up in the back seat when you feel you really need that rest. You might even just move your keyboard or laptop aside and plop your head down on your desk. If you slap on some noise-canceling headphones, you might manage to drift off for a bit.

Granted, all of this assumes that your company condones or encourages midday naps. If it doesn't, then the last thing you want is to be caught sleeping on the job. That said, if you truly feel that napping here and there will make you more productive, you might make the case to your boss about giving it a go, especially if you pledge to complete all of your work on schedule in spite of those breaks. You never know what you might gain by incorporating daytime naps into your routine, so if you're among the countless Americans who can't seem to get enough sleep, it's certainly worth giving it a try.