Many people become the boss without having any specific management training. Sometimes you get promoted for reasons that have nothing to do with being in charge or directing the work of other people.

That's not an excuse to be a bad boss. You can learn how to manage, and it's possible to become a good leader by doing just a few things. If you follow these three pillars of conduct, you may not be the perfect boss, but you will have gone a long way toward getting there. 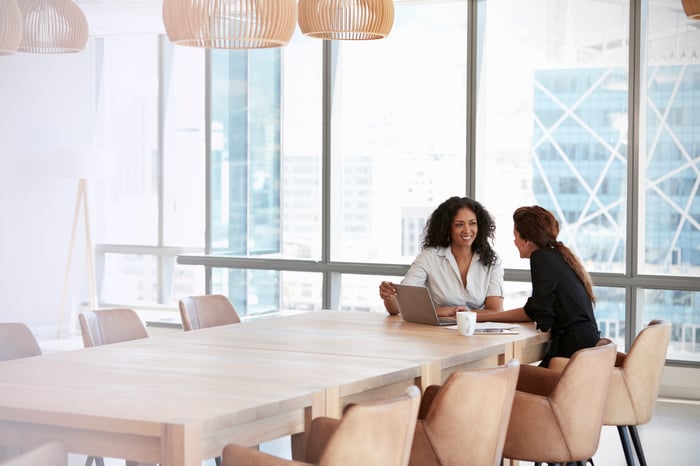 A good boss listens to his or her employees. Image source: Getty Images.

1. Listen to your employees

One trait many bad bosses share is that they believe being in charge means deciding what to do and charging ahead without listening to anyone. It's important to have an idea of where you want things to go, but it's just as important to not only listen, but solicit opinions from your employees and make it clear you hear what they are saying.

Doing so can protect you from your own worst instincts. Listening also allows employees to feel like they're part of the process, and that creates buy-in, where your idea now becomes everyone's.

Being the boss may give you some perks that your employees don't receive. Don't take advantage. You, for example, may have more flexibility when it comes to arriving or leaving. That's nice, but it's more important to set a standard for your employees.

Arrive early and leave late. Show your employees what you expect by actually doing it. That makes it very hard for people to justify putting in less effort than you do.

You're already the boss. That automatically gives you credit for the successes of your team. Make sure you shine the spotlight on other people. Find little things to celebrate. Make your people feel valued for everything they do, and make sure everyone feels like a part of anything that goes well.

As a boss, it's part of your job to protect the people who work for you from negativity from your superiors. Sometimes this means shielding people from unfair criticism, and at other times, it means taking responsibility for whatever your department has done.

Sometimes upper management can create a bad attitude or otherwise sow discontent. It's your job to bear the brunt of that so your people can focus on the job at hand.

Be positive and work hard

Remember that being the boss does not make you infallible. Empower people to do the best job possible, and support their success (or help them bounce back from mistakes) in order to create an environment where everyone works toward achieving group goals.