Please ensure Javascript is enabled for purposes of website accessibility
Log In Help Join The Motley Fool
Free Article Join Over 1 Million Premium Members And Get More In-Depth Stock Guidance and Research
By Maurie Backman - Aug 18, 2018 at 10:02AM

Are you an awful manager? Here's how to know -- and how to do better.

Are you a bad boss and don't even know it? Chances are, you're not trying to be a terrible manager, but you may not be making an effort to overcome the qualities that make employees resent working for you.

Being a bad boss is problematic for a number of reasons. First, if you get that reputation, you'll increase your chances of losing your title and getting demoted, if not dismissed altogether. Even if your job isn't compromised, if your direct reports regard you as a bad manager to work for, they'll be less engaged, happy, and motivated. All these things will impact their performance -- and yours.

That assumes, of course, that working for you doesn't drive them to quit. In a recent study by The Predictive Index, LLC, 77% of employees who think they have bad managers are aiming to jump ship and move elsewhere. If you'd rather not lose the bulk of your team or suffer the aforementioned consequences, it's imperative that you recognize the qualities that might be making you a bad boss -- and do something about them. 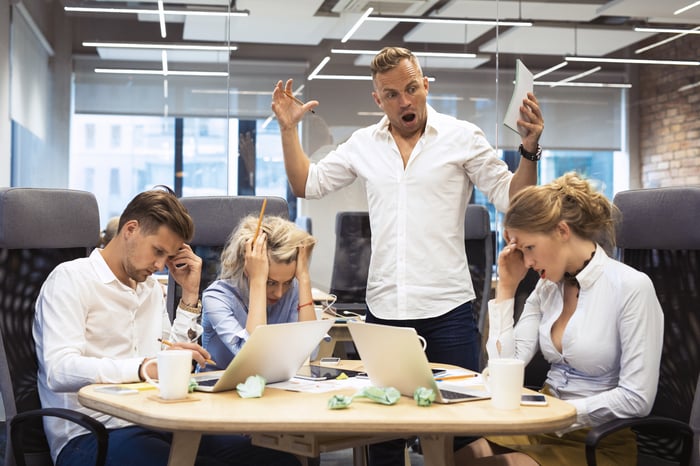 What makes a terrible boss?

According to the aforementioned survey, these are the qualities that make managers bad ones:

So how can you improve in these areas to be a better manager?

First, consider scheduling weekly one-on-one meetings with your direct reports so that they get an opportunity to share their progress and concerns, and you get a chance to affirm your expectations, provide feedback, and offer the guidance they need. Will those meetings eat into your regular work time and schedule? Of course. But a big part of being a manager is making yourself available to your employees, and the more you do, the more you'll all benefit.

Another step to take on the road to becoming a better manager is making an effort to treat your employees equally. This isn't to say you can't reward top performers with more responsibilities, but make sure you're basing your decisions on work ethic, skills, and contributions as opposed to making it a personality contest.

Furthermore, frustrated as you might be with some of your colleagues, mouthing off about them behind their backs isn't going to help your cause. If anything, it'll only make you look petty and unprofessional. If you're having issues with specific individuals at your company, aim to work them out directly, or involve HR or your own boss, as necessary. But don't resort to gossip or undue criticism that will reflect more poorly on you than on them.

Additionally, work on becoming more openminded at the office. Just because your employees might be a level or more beneath you on the organizational chart doesn't mean their opinions and ideas aren't valid. And if they're bold enough to vocalize the ways you're letting them down, don't dismiss them. Being open to feedback shows a degree of professional maturity that good managers are known to have.

Finally, recognize that it's better to do a good job than to be right all the time. You might think that being proven wrong reflects poorly on you, but in reality, no one is perfect, and we can all stand to do some learning on the job. And who knows? If you're willing to let your guard down a little, you just might improve a skill, hone a technique, or snag some knowledge that makes you better at what you do.

When you're a bad boss, nobody wins, so if your reputation has taken a turn for the negative, it's time to address it sooner rather than later. Not only might it spare you the hassle of replacing team members when they ultimately lose patience and jump ship, but it just might spare you the embarrassment of losing your title altogether.